April is marked as National Distracted Driving Awareness Month. Authorities from across the country work hard to promote it. The community has one simple message to deliver:

One text or call could wreck it all!

Police in every state pays attention and takes every measure to remind drivers what is really important when they are behind the wheel. Statistics prove that when you put away your cell phone while driving the chance of getting into an accident is much lower.

According to statistics, almost 65 percent of accidents occur due to distracted driving, and the most popular cause is cell phone use – texting or talking.

State laws are adjusting accordingly, as many are banning cell phone usage while driving. Presently, ten states plus DC, Guam, and the Virgin Islands have banned both texting and talking while driving, and 34 states have banned texting only.

Moreover, governors and state authorities organize educational events at schools and community centers to educate young and old on the dangers of cell phone usage while driving.

April has been federally designated by the US Department of Transportation to direct everyone’s attention to this issue. State departments and non-profit organization are doing their best to educate drivers about the dangers of texting or talking on a cell phone while driving. Wisconsin DOT, for example, will sponsor TV and radio messages statewide during the whole month of April.

The statistics speak for themselves. The fact is that texting and talking while driving is killing people. 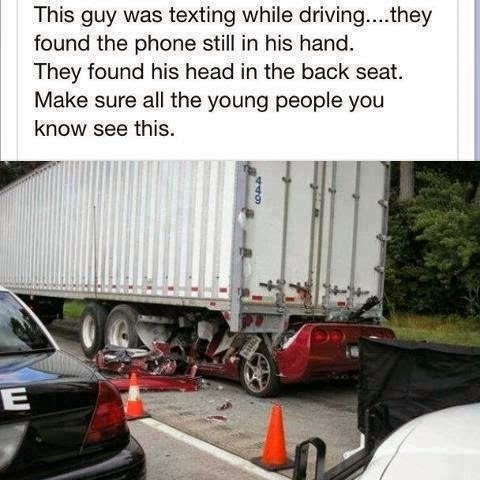 Distracted Driving is killing people! We found this online and wanted to share it with you. It will probably stick with you for a while. Next time you jump behind the wheel think about this photo and about texting and talking while driving.

Surveys show that 8 in 10 people support the ban on cell phone usage while driving, yet only ten states have enforced any laws. Despite the laws though, too many people still take the chance and keep doing it every time they hop behind the wheel.

In 2011 the National Transportation Safety Board (NATSB) recommended a complete cell phone usage ban in the whole of the US. Yet, very few states have implemented new laws and done that. The rest have various laws dealing with distracted driving, but they don’t seem to be stopping the problem.

Do you think a national law should come into an effect and ban cell phone usage while driving?

At Corsia, we believe that national law should be enacted to make it illegal to text and talk on a handheld device while driving. Because people are being killed on the road every day because of this.

Distracted driving is the number one killer of American teens, but it is not limited to young drivers only. The Federal Motor Carrier Safety Administration had prohibited commercial truck and bus drivers from texting with any handheld device. Last year, interstate bus drivers were added to the bill. We could say that the US Department of Transportation is working hard and doing a good job to make the US roads safer.

Few things are more dangerous on the road today than texting or talking while driving. Many older people have a hard time understanding how far we have come to allow technology to help us advance and at the same time help us die outrageously easy. Unfortunately, many young people forget their responsibilities on the road and think that it is just a game. It seems like the idea of sending a text or talking while behind the wheel of a 2 tons vehicle rushing at 50 mph does not scare today’s generation. And this is scary.

The authorities’ advice is to not ignore the statistics because you can become part of them. For more information about distracted driving visit the Official Government Website for Distracted Driving.