Camping in your car:Answering the call to adventure

Humankind has been looking for ways to excite itself since the dawn of time. That peculiar urge for adventure runs deep within our genes. Why else would we ditch our comfort to spend nights away from a solid shelter? That kind of “discomfort” has an inexplicable pull on us!

With that said, challenging yourself in such a way has become more and more difficult. Comfort is everywhere. You can even make camping quite a trivial experience.

I have already explored one way of taking these adventures to the next level. You can learn more about that in my post on Overlanding. However, today we have a different goal.

Let’s look at a less extreme way of escaping the mundane. How do people blend adventure with just the right degree of comfort to not bore themselves? And what does it have to do with cars? Let’s find out!

A very brief history of camping

I have been fascinated with camping for a while now. When I first started looking into it, I was blown away. Тhere is this whole niche for people who equip themselves to brave the outdoors. Not only that, but we also have drawn our vehicles into the picture. Isn’t that odd, though? After all, we have invented housing to subdue nature. How did we then come up with the idea to get a break from those comforts?

Though now ubiquitous, camping doesn’t go that far back. It only became popular by the end of the 19th century through Thomas Hiram Holding. And at first, it was done mainly along the River Thames in the UK. People saw it as a natural extension to pleasure boating. Eventually, the camping practice spread throughout Europe and extended to the US.

Here is where things get interesting. Actual camping equipment took some time to become backpack-friendly. In the beginning, it was way too heavy for people to carry. How did they fix that? They used boats to transport it! Some ingenious folks even fitted their watercraft with tents to make the process easier.

Because of all that, we can say that vehicles and camping have always gone hand in hand. It is only natural that people would figure out a way to improve on that. Shall we take a closer look at how they did it?

How cars and camping go together

Currently, one of the most popular ways to experience adventure traveling is through an RV. However, some people think that recreational vehicles are too close to comfort for such a task. On top of that, you either need a dedicated vehicle or at least a trailer. But what about car tents?

The cool thing about tents is that you can make them fit pretty much anywhere. You only need a bit of creativity for that. So it follows that people invented car camping as soon as personal vehicles became popular.

Sadly, the actual beginnings of this practice are lost to history. I did manage to find 1922 Ford Model T pickups with tent setups, though. That seems quite fitting, as pickups have become the perfect vehicles for car camping. You can put up a huge tent on them, or even purchase them pre-fitted with such a module. That isn’t to say that you cannot do the same with other cars too. Now that I mention it, we can see how they do that! 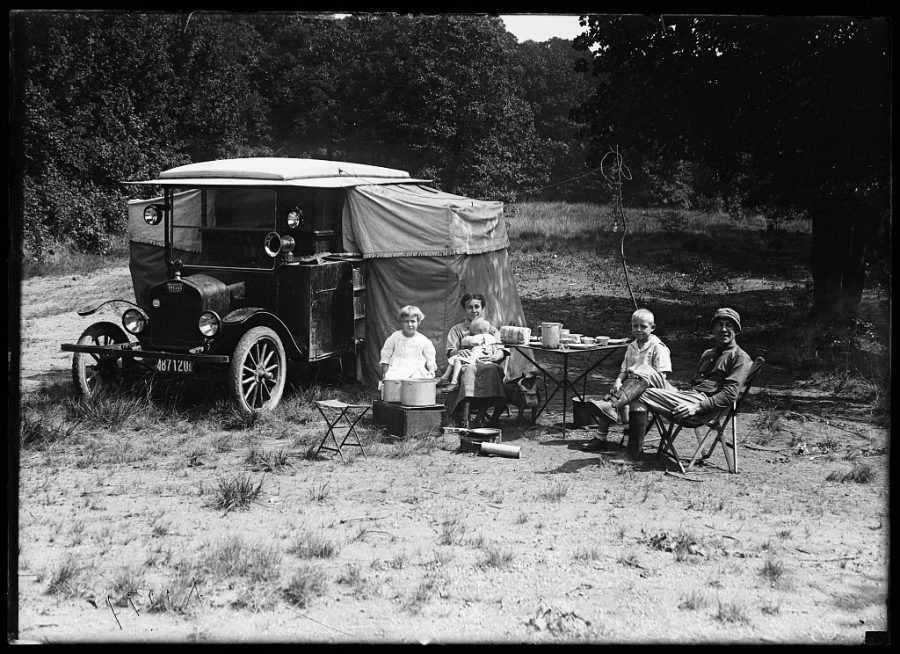 Modern car tent solutions exist for pretty much any car that can handle them. With a strong enough frame, even a basic sedan can be an excellent platform for roof tents. In fact, some overlanders prefer them to actual off-road campers.

Such tents have been in use since the ’30s, even if they were not that popular then. They became more widespread in the ’50s, and with the rise of different off-road vehicles like Land Rover later on. Today, the options are plenty. However, some would say that this is more like camping on your car, not in it. Fair enough! 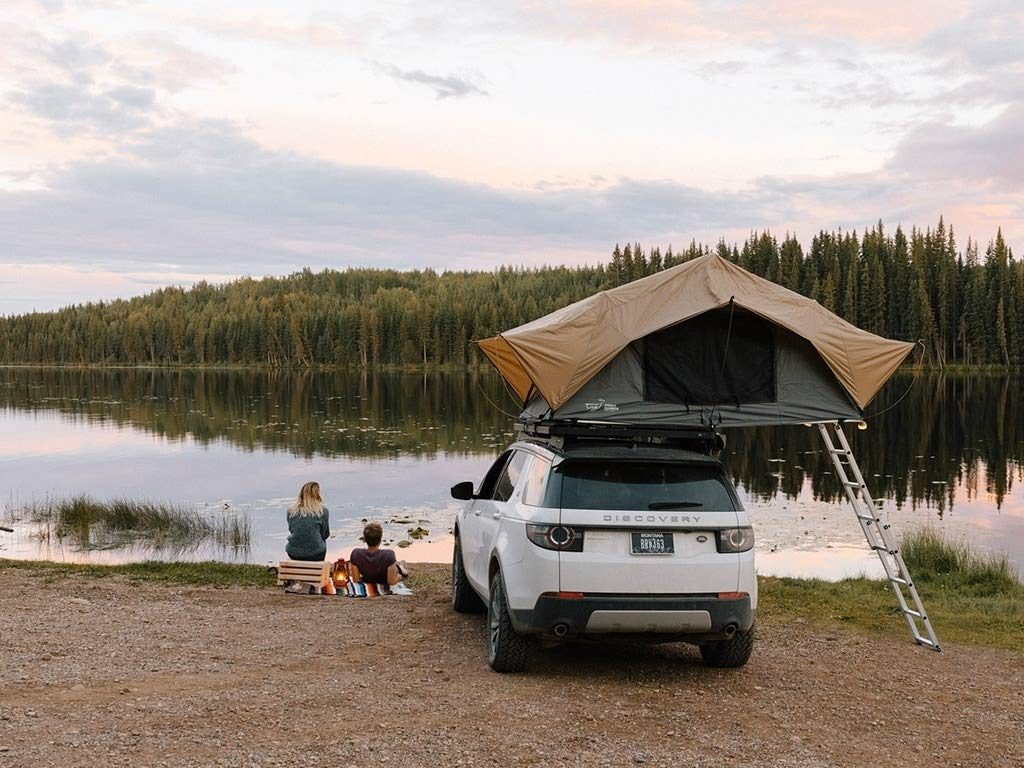 Another type of car tent has been used with hatchbacks in the ’50s and ’60s. With their folding backseats, those cars offered an exciting way to camp. You could pretty much turn your entire trunk into a tent with a proper bed. That was an even more accessible way for car camping since you did not need an off-road car. 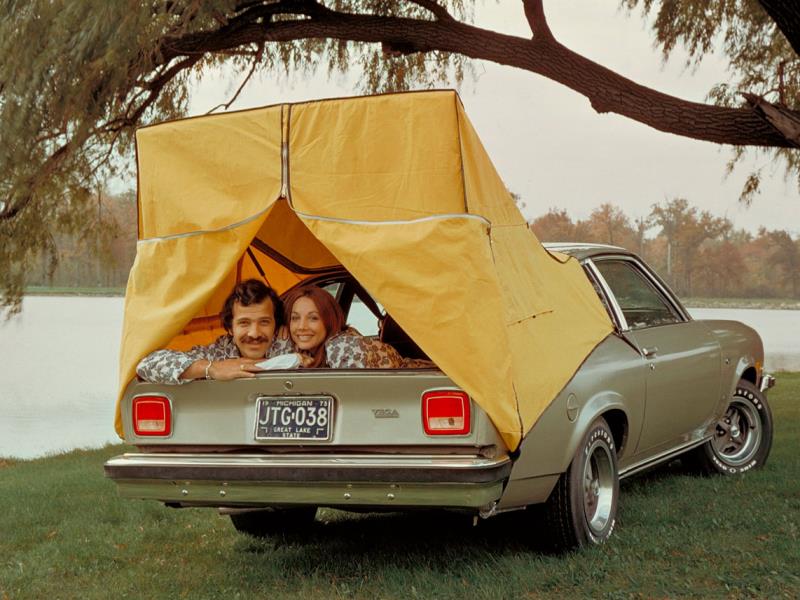 But like I said a moment ago, pickups were wonderful for turning into mobile sleeping rooms. Manufacturers and third-party companies alike offer different setups for those vehicles. Recently, Tesla came up with the Cybertruck, which will have such an option. With the added solar panel on top, you can pretty much live in it if you want. It begs the question – with so much comfort, are we really having an adventure?

Striking the balance between comfort and adventure

I started this article talking about how we are drawn to a bit of discomfort. But all those car additions have made camping fairly easy, too. Or have they?

Now, I would agree that trends like “glamping” are going too far if you want to camp in a resort and have a pretty much 5-star-hotel experience – fine. That would hardly classify as an adventure, though. Yet, I would argue that camping in your car is nowhere near that. In fact, the adventure lies not with the very act of camping itself, but with something different.

Here is a list of a few things that make car camping a unique experience:

It becomes evident that car camping’s focus is not on survival. It does not have much to do with your sleeping comfort either. Instead, I think it’s for people who want a more adventurous way to travel and explore. So what if it does not challenge your camp setting skills? Is it still a good way to escape the mundane? Absolutely!

How you can experience car camping too

Everyone should go on a car camping trip at least once in their lives. Firstly, it is a lot of fun. Secondly, it can give you a different perspective on your comfort zone. Thirdly, it is a much more memorable experience than sitting at the beach. What am I saying, you can actually be camping at the beach if you want!

The question is, how can you go about reasonably doing that? After all, not everyone has a car they can fit with a tent. Well, you do not need one. You can simply find a proper tent and set it next to your vehicle. Some options allow you to still use your vehicle, depending on its type. It does take a bit more work, though. It may also not be as comfortable. But hey, embrace the adventure!

With that being said, you have to figure out where you want to go. Maybe you want to explore a remote state. Do you drive all the way there, thousands of miles interstate roads? That may not be an awesome experience. Good thing, there are solutions to that. You can look into shipping a car from New York to Colorado, for instance, or any other two locations that are far apart. That way, you will avoid unnecessary wear and tear on your vehicle.

Finally, you have to prepare yourself a little bit. Read camping guides to get an idea of how to go about the activities. And a word of caution – avoid buying all the car camping gear out there. You may be tempted to do it, but chances are you don’t need most of it. Plus, don’t feel like you have to know everything. Part of the adventure is figuring some things out as you go!

Do you want to go car camping?

Camping is one of my favorite summer past times. There is nothing like exploring the country at your own pace. Even a weekend away from all the rush still charges me up a ton!

But what’s your opinion on it? Maybe you have never been a camping person because it takes too much work. That’s fine. Though I should say if your car is suitable for camping, you will be covered there. Seriously, if you have an SUV, a hatchback, or a pickup, you are pretty much set.

I will also let you in on a secret – once you get hooked on camping, there is no going back. My current dream is to get an old off-roader, mod it a bit, and make it a camping beast!