Car Carriers from the Past, From Artsy to Scary

Have you ever wondered what life was like without all the convenience we have today? Now every effort, risk or danger is brought to a minimum in any activity, both personal and professional. Especially in car shipping. Aren’t you curious what it was like before? Was it fun? Or was it dangerous?

When the production of vehicles first started increasing back in the second half of the nineteenth century, auto dealers were faced with an issue.

They had to find a way to transport the large number of vehicles from manufacturers to their dealer shops, which was more efficient than the railway boxcars. It’s been over 100 years now, a century in which the auto transport industry has changed significantly.

It was back then that the first semi-trucks and bi-level auto carriers came into use.

Car Carriers from the Past: From Artsy to Scary

Even air shipping gained popularity very quickly and today we can choose from variety of options to transport our vehicles in the most suitable for us way. Modern, safe and convenient. Things we take for granted that have required efforts and innovations to bring the auto transport industry to what it is today. Sometimes, however, it can be fun to look back when the vehicle shipping wasn’t as professional as it is these days.

Many auto dealers were inexperienced in managing vehicle shipping since it wasn’t something they had to do that often before. They were faced with too many important questions: how many cars we can ship at once, how much fuel we have to pay, do we need our own car haulers fleet and more. Some automakers, however, managed to fit one more topic in the list of duties: the style of the car carriers themselves. For many they turned into a whole separate fascination.

The design and shape of the car carriers served as a piece of marketing itself – it attracted attention, it advertised the auto dealer, and most importantly – it spoke about the character of the auto dealer itself. This is why owners of dealerships invested large amounts of time to choose the right make and model of car carrier they wanted to be remembered with. 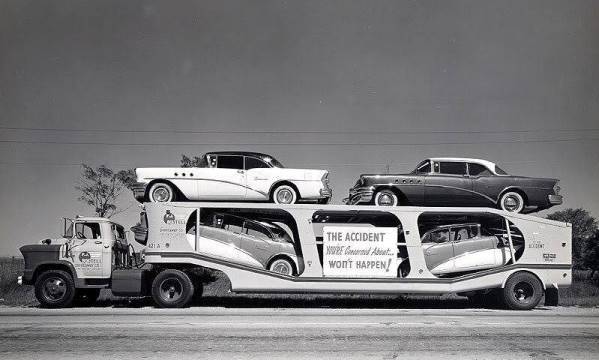 It could fit a par of cars at the ground level and two more on the upper deck of the trailer.  No matter the brand of the carrier, all four-place carriers attracted the attention of other drivers on the road and other commuters close to the dealers.

It was so impressive primarily because of the design of its lower deck. The steel bodywork always formed void spaces that reminded of windows, which inspired people to look into the carrier and see what was on the lower level. The upper deck was open with no side protection, which no matter how risky, always turned the transported vehicles in to trophies proudly standing on the top.

How would you resist the temptation if you saw one of these? Maybe manufacturers back then did not consider all these elements and none of this was on purpose, but looking at these quad trailers now, I definitely want the Buick on the lower left!

Art history played a surprisingly huge effect on the styles of car carriers.

Elements of different design movements were incorporated in the style of the trailers. Art deco, for example, had a huge influence on some manufacturers, including Dodge. The carrier on the side is a Dodge trailer operated by Commercial Carriers Inc, which strikes with the futuristic sides of the trailer. I can’t restrain from mentioning that the 1946 Plymouths make it look even more attractive.

Sometimes however, attractive was not exactly how the carriers looked. Dangerous and scary are probably better words.

This Dodge, for example, was a custom-engineered prototype which allowed for a couple more vehicles to be transported at the same time with the usual four. The cab of the truck is detached from its normal position to a place right above the engine, which gives space for more cars on the trailer. Would anyone rely on this car carrier today, however? Yeah, we don’t think so either.

It is scary to even think about the pressure the driver feels throughout the whole way. Such experiments were quite profitable for dealers since they let them transport more vehicles for lower costs, but the risk was too high to make this type of carrier last through the years. The driver’s position seems too dangerous for this whole construction to even be approved today. 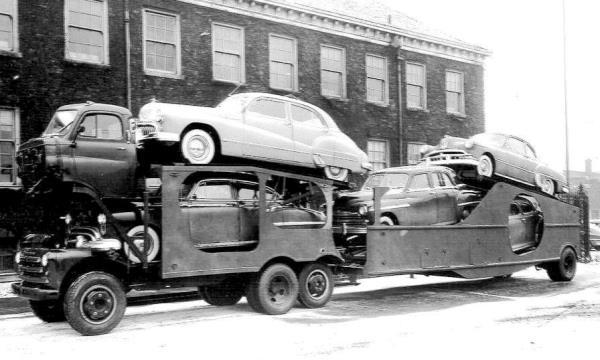 Dodge is definitely our favorite brand when it comes to car haulers. Each model they designed during the 20th century is worth a comment. Especially when you see a hauler loaded with a fleet of the Dodge Daytona. Looking at it today makes me think how any of the cars on it managed to stay still during transit. It seems like each car loaded is getting ready to take off any minute.

Ford was another big brand that created its own fleet of car haulers. It seems, however, that their experiments were more successful – both in terms of design and safety. The Ford COE is still one of the most favored haulers because of its chubby vintage shape. Cute would be the word that fits it best. Safety aside, when we see the COE hauler in bright colors, we can’t say no to the adventure!

What we can’t restrain from looking at is the elegance of the design of the race car haulers! 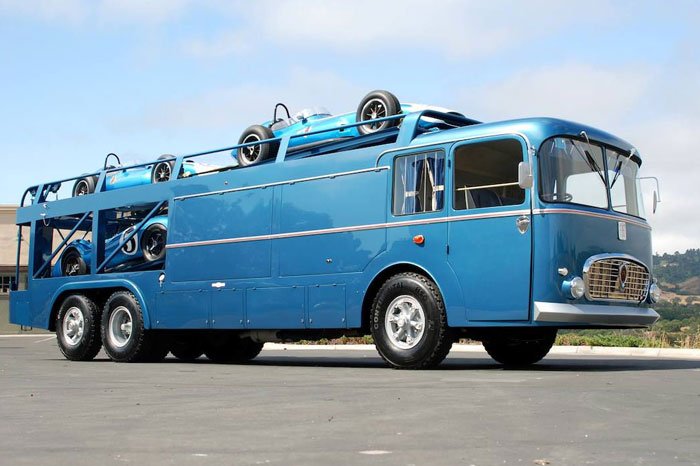 Maybe they did not look quite like this in their original versions, but the restored ones are way too smooth and sleek for us to handle calmly. Especially the Scarab Transporter that got tons of media attention in the past years. When it was originally built, it was destined for Lance Reventlow’s European F1 season, built in Italy on a Fiat chassis. It was then sold to Carroll Shelby for the 1964 European racing season who gave it the blue color that made it so popular today. It took over $600,000 to be restored but we can honestly admit it was worth every penny.

Remembering that these were some of the first car carriers ever makes me shiver. In some of them beauty prevailed over safety precautions for sure. But it is still sad that there is not that much thought put into design these days. Curiosity makes me want to see one of these exact car carriers on the road today. Reason, however, is screaming to leave it all in the past and be thankful for the evolution of technology and intelligence which have brought us safer and more secure option.