The Concept of Driverless Cars in the Past

If you are one of those tech enthusiast who gets overly excited at the mere mention of autonomous vehicles, here’s something that might come as a surprise. Your grandma knew about driverless cars long before you even thought about them.

People were introduced to the idea of driverless transport as early as the beginning of the 20th century. Already in 1920 the concept of “phantom autos” gained popularity as the vehicles with no driver, followed by numerous technology demonstrations to people across the country.

Concept of Driverless Cars in the Past 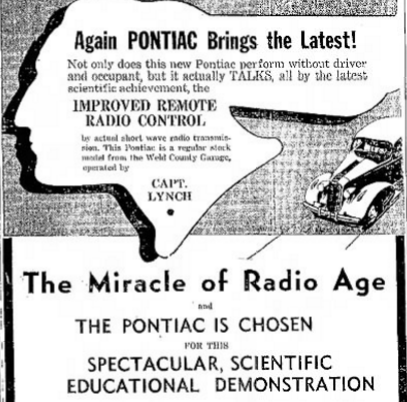 An Ad for the Phantom Autos, 1935 (Newspapers.com)

Those cars had one significantly different feature from the driverless vehicles of our future – they weren’t computer-driven.

Phantom autos were remote-controlled by the tapping of a telegraph key. What we know from public sources is that often along with the first driverless vehicle there was a second one following it. The driver of the second vehicle operated the phantom car with the aid of a morse key. It required a distance no bigger than five miles for the second automobile to be able to have control over the first one. Quite like a toy car.

Of course, radio control allowed vehicles to have no driver behind the wheel. But in the sense we know the phenomenon today, phantoms definitely weren’t self-driving.

Yet, imagine the sensation that each of these demonstrations created in the masses. According to the Times Recorder, to catch a glimpse of the phantom auto was to see “one of the most spectacular street events possible.”

One of the first widely known attempts for driverless cars was the Linrrican Wonder. It was produced in 1925 by Houdina Radio Control, a radio equipment firm. The Linrrican Wonder traveled through a traffic jam in New York City and was controlled by a transmitting antenna. The car behind this “phantom auto” sent signals to the antenna, and the signals worked on small electric motors.

Several decades later, scientists started showing more interest in the concept of driverless cars. Their efforts focused on making the car move by implementing devices or electronic equipment in the roads beneath the cars. In 1960, the RCA introduced the idea of an electronic highway and soon various states were eager to invest in its development to improve traffic handling.

Driverless vehicles were a hot topic not only because of these demonstrations. Writers of that era could not stop talking about the automobile wonder of the future . Novels such as Utopolis by Werner Illing and The Living Machine by David H. Keller strengthened the fantastic image of vehicles that drive themselves.

The most fascinating thing about phantom cars was the improved safety they provided.

While this feature is widely questioned today, back in the beginning of the 20th century this was a promise directly relevant to the ongoing suspicion and dissatisfaction about the numerous cars on the roads. One of the fist mass views of driverless cars was in a 1935 educational road-safety movie ‘The Safest Place’, commissioned by General Motors.

At some demonstrations, phantom autos served as a tool to help automakers gain people’s trust. These cars represented innovative for that time technologies and promised that the vehicles of the future “will only stay in the right lane”, something even cars with drivers often failed to do.

At the time when cars were considered as pure evil, this concept created the illusion people needed to restore some of their faith back. When we look at the concept of self-driving cars today, what does it give us apart from sleeker design and high-tech experiences? It is surprising how relevant safety is still today. But somehow the benefit of convenience seems to be dominant.

While before driving was considered a privilege, now it feels like a burden. And any new technology that can ease that activity for us is welcome in the market. The question is – will automakers finally be able to make the concept a common reality among the masses almost 90 years after it first became a topic of discussion?