Electric cars will be cheaper than conventional by 2022.

There comes a time when new technology is so accessible that our old tried-and-true alternatives become obsolete. So when will electric cars stop being a trend and rather become mainstream?

According to some predictions, the 2020s will herald the beginning of the era of the electric car.

Following the pattern of technological evolution in the past and how it shaped the behavior of generations ahead, electric vehicles will, too, cause significant shifts in the world of the future.

To give you an example of the upcoming changes, think of the oil supply that will be no longer needed. Some researchers speculate that electric vehicles could displace oil demand of 2 million barrels a day as early as 2023. The only question here is, will this indeed happen so soon?

Will electric cars become cheaper than conventional by 2022?

Why not? It seems like electric car sales are increasing every year. In 2015, EV sales grew by 60 percent worldwide. And surprisingly, this is the same annual growth rate that let Ford’s Model T surpass the usage of the buggy and the horse in the early 20th century.

The first game-changer, as we often call it, had a development trajectory almost identical to the one of Tesla Motors today. Coincidence? We don’t think so.

Tesla Motors announced that it is aiming to bring EVs to the mass market. And the company’s first official step towards this goal is the Model 3, which falls in the $30,000 price range. By 2019, over 250,000 Model 3 EVs have been sold.

Similarly, Nissan and Chevrolet have been following Tesla’s footsteps with their EVs, thus allowing for a much wider spread of electric vehicles. There is speculation that by 2040, electric vehicles will account for 35 percent of all new vehicle sales.

And, as EVs are growing in popularity, you may be wondering if it’s time to make the switch. We’ve delved into the question – Should you buy an EV? – in one of our posts. Give it a look – we hope it helps. 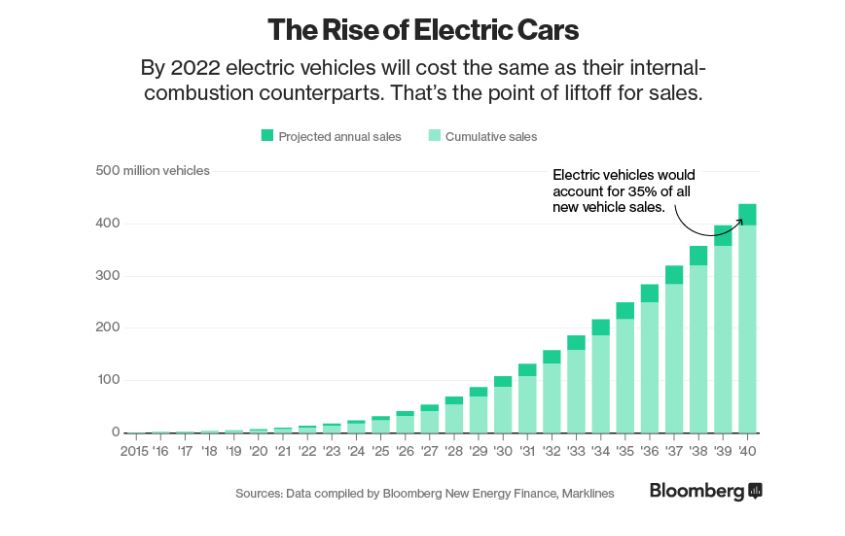 According to the BNEF report, new EV sales could be as high as 50 percent in 2040 if ride-sharing services become successful, or as low as 25% if oil prices remain very low for many years. As Salim Morsy, senior analyst and author of the report stated that “the central forecast is based on the crude oil price recovering to $50, and then trending back up to $70-a-barrel or higher by 2040.”

If the oil price were to fall to $20 per barrel and remained on that level, this would only delay the mass adoption of EVs to the early 2030s. 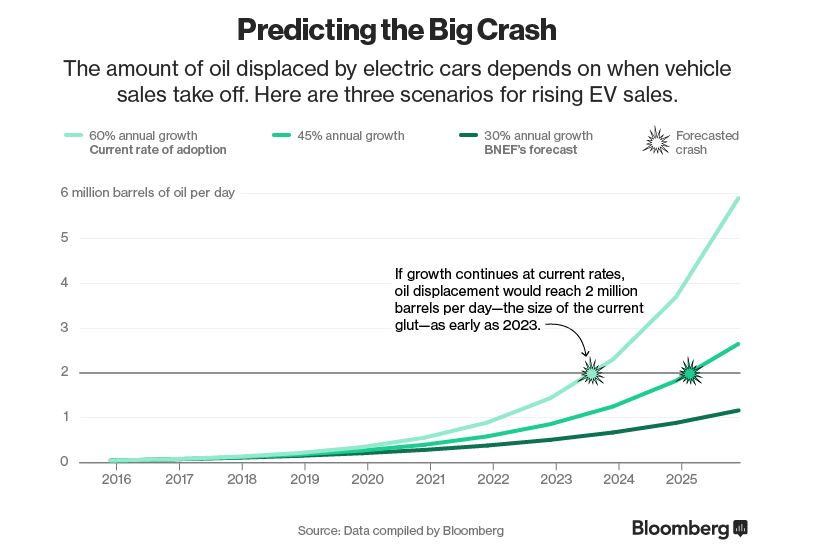 Yes, ok, we all want to kick our addiction to fossil fuels. And it even looks like we already have the necessary technology to do so. But nevertheless, EVs today comprise only 2.6 percent of all new car sales in the world. Electric cars are still very rare in developed countries, and most other nations can’t even afford them.

Skeptics would say that with these levels of distribution and infrastructure, there is no way electric vehicles would rise to 35 percent of all car sales. There is a need for significant investment in bringing awareness and understanding of sustainable technology in most countries, along with developing and expanding the power stations across the globe. Even after all this is completed, the result will be that the plug-in cars would still cost a fortune. Which begs the next question…

Is sustainable transport feasible in the near future at all?

Well, nobody thought the DVDs were possible. And they replaced VHS in less than a decade. This time, however, the facts are speaking for themselves, and you must be blind not to see them.

One of the main reasons that would allow for the quick invasion of EVs in the mass market is the decrease in the cost of battery production.

According to Colin McKerracher, lead analyst at BNEF, “lithium-ion battery costs have already dropped by 65% since 2010, reaching $350 per kWh in 2015. We expect EV battery costs to be well below $120 per kWh by 2030, and to fall further after that as new chemistries come in”. Moreover, this will bring EVs cost down to less than $22,000 in today’s value, according to the projections of Bloomberg finance analysts.

The infrastructure needed for the kickstart of EVs to the mass market might seem to be another obstacle. However, several global studies have predicted that the availability of charging stations will not be a problem. On the contrary, the number of power stations will increase more than ten times by 2020.

Another reason for the quick development of the EV market that is no less important than the technicalities is the effect electric vehicles have on the environment. EVs are vital to cutting down carbon emissions and dealing with air pollution in cities. They can eliminate nitrogen oxides (NOx) and sulfur oxides (SOx), which are the cause of many premature deaths of plants, animals, and people every year.

According to researchers, by 2050, the electric vehicles could help reduce annual greenhouse gas emissions by 1,030 million metric tons relative to 2015 levels, a 45% reduction.

As we can see, there is little left that can delay the introduction of EVs to the mass market. Even if conventional cars improve their efficiency by 3.5% a year, EVs still have a good chance of becoming cheaper by 2022. However, EV sales will rise faster in countries that invest early in charging infrastructure or environmental policies.

It might still be a little hard for the majority of drivers to accept the possibility of charging a car as if they were charging a laptop. But let’s keep an open mind.

In the meantime, while you are still driving a conventional car, you may wonder how to reduce its environmental impact. You can learn about it in our post on decreasing your car’s carbon footprint.