I was driving in the city one day in a hurry to meet with my realtor. She had found a couple of apartments I could take a look at and possibly decide to make one of them my next home. I was excited because the process of finding the right apartment, we all know, could turn into a nightmare. I was driving slowly  as I saw there were a few traffic lights coming in a row. I had to call my realtor to let her know I am on my way to meet her at the first address. It was a 20 sec call. The moment I hung up I saw a police car behind me flashing. While I was trying to figure out whether this was for me, the police turned on the sirens. It happened just like on TV when they chase criminals. But wait a second, I was not a criminal. What wrong had I done?

I pulled over and waited. That I knew – don’t do anything just sit and wait. I saw a tall, well build woman in a uniform walking towards my car. I was feeling really confused. She asked me do I know what I have done wrong. I said no.

“I really don’t know why you pulled me over Barbie ! Come on tell me and let me go because I am in a hurry. My realtor is waiting for me. I need to know if I have finally found my apartment or the hunting will continue,“ I was thinking to myself.

“ Are you schmucking kidding me? You pulled ME over because I was on the phone? Just LIKE EVERYONE ELSE?!” I was again saying this in my head.

The police officer obviously did not care about my thoughts. I was still waiting for her to let me go. This didn’t happen though. She asked for my driver’s license and walked back to the police car. In a few minutes, that seemed hours to me, she came back. She said I am getting a ticket for talking on the phone while driving. She also told me that my address registration is different in their system and the address on my license does not match. She asked me where I live. I was already breathing fire and it was difficult for me to talk. Yet, I had to. I explained I am about to move to a new place and will gladly change my address once I find my new apartment. I politely added that I am just going now to see an apartment. She did not care for my explanation. Moreover, she told me that I can get a ticket for that too. I was close to exploding, but I had to hold it. I managed to make a painful grimace. She handed back my license and the ticket and told me I can go. That was the day I got my first ticket.

I crashed my car and the police was guilty

I collected my driver’s license and my ticket and started my car. I did not wait for the police to leave; I just got on the road as soon as I saw a gap in the traffic. Road rage mode was activated. Road rage always leads to something bad. I know that. I learned it on the road that day. Rage is by definition irrational. I don’t think mine was irrational though. Or at least that’s what I thought that day. Rage is when you get out of your car and punch someone’s window because he waited too long to make a turn when the light turned green.

Here is what road rage means according to Wikipedia: Road rage is aggressive or angry behavior by a driver of an automobile or other motor vehicle. Such behavior might include rude gestures, verbal insults, deliberately driving in an unsafe or threatening manner, or making threats.

Driving is risky and emotional experience. After the ticket situation was over I was emotionally unbalanced. I was pissed and hated the traffic and all the drivers in that moment. I hated the fact that I have to drive so much in the crowded city to get where I needed to go. And now, I got a ticket for $100 for talking on the phone. I had to call again and I was afraid. Yet, I was so enraged that I said the “f” word and looked at my phone. The moment I lifted my head to look at the road again the car in front of me was already too close. The collision was unavoidable. My bumper smashed into the other car’s rear bumper. It all happened in a split second and I could not believe my eyes. The other driver’s car was ok, but mine was wrecked. 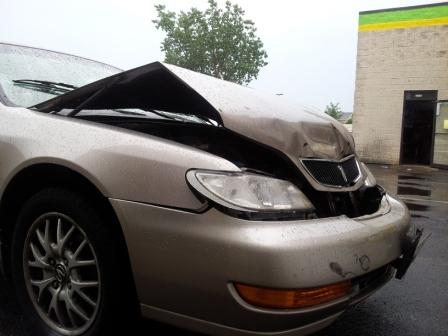 I got out of my car to see the damages and started shaking and crying. The other driver’s car was ok. We pulled over and thank God he was understanding. We exchanged phone numbers, but he said he is ok and the car is old and he does not care for a couple of scratches. He was more worried about me. 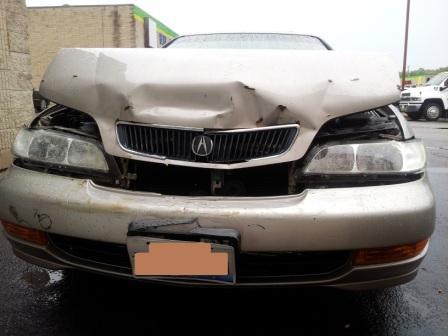 The whole situation was my own fault. I knew that and I was mad at myself. I shouldn’t have talked on the phone while driving. After I got the ticket, I should have waited a few minutes to cool off instead of hitting the road again. My emotional state caused my rage and my accident.

What contributed to my rage?

Road rage is caused in many cases by the lack of control, lack of tolerance or often territoriality. It is not easy for many of us to achieve self control in tense situations. We often consider our cars extension of ourselves that’s helping us achieve our goals and shields us from our fears. Being on the road really becomes complex sometimes, but we often don’t realize it. Getting pulled over by a police officer affects us and we feel violated, especially when we know we are a good driver. I do think I am a good driver, but driving is not an isolated action. On the road we are a community of drivers.

Driving is also a communal activity. You might think of driving in terms of your own individual experience. But once you pull into traffic, you’ve joined a community of other drivers, all of whom have their own goals, fears and driving skills. Psychologists Dr. Leon James and Dr. Diane Nahl say that one factor in road rage is our tendency to concentrate on ourselves while dismissing the communal aspect of driving. It’s very easy to perceive another driver’s actions in terms of how it affects us, which in turn makes it easy to transition into anger [source: James, Nahl].

The only good thing is that I did not vent my frustration on anyone else and I did not hurt anyone. Yet, the result was damaging to my car and my wallet.

Being aware of our emotional state is key in making the right choices while on the road.

Let me know if you have any suggestions on how to avoid such rage on the road. I would love to hear them. Also, feel free to share your personal road rage story. Thanks!