More than 3,500 times per day – that’s how often the term “self-driving car” is mentioned on the Internet these days. Brandwatch states that in three months (May-July 2016) the term (and related ones) has been mentioned over 600,000 times. That’s most definitely the hottest automobile topic today. But the hype over autonomous vehicles has largely ignored the many potholes along the way of their development and implementation. The goal of authorities and manufacturers should be not only to keep pace but to ensure public safety. Luckily, the situation is about to change.

A few weeks ago the U.S. Department of Transportation issued a comprehensive policy and guidelines for self-driving vehicles. The document outlines the research plans on related safety issues as well as recommendations for states on testing, licensing, and regulation of “autonomous” or “self-driving” vehicles. U.S. Transportation Secretary Anthony Foxx describes the policy as an “unprecedented step by the federal government to harness the benefits of transformative technology by providing a framework for how to do it safely.” The policy suggests an approach for assuring transport safety and driving innovation through four key parts. 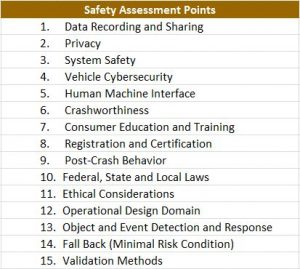 The first section of the policy outlines best practices for the safe pre-deployment design, development, and testing of self-driving vehicles before the sale or the start of the operation on public roads. This part serves as the initial step to guide the safe testing and deployment of AVs so that manufacturers know what regulators will look for.

The Vehicle performance guidance uses a 15-point Safety Assessment to set clear expectations for developers of automated vehicle technologies. Some of these are rather self-explanatory, yet there some that we would like to emphasize.

It requires that all systems in the vehicle be documented and tested. Also, testing procedures for each system should be established. Most importantly – the documentation should show explicitly where the capabilities of the vehicle end. In other words – to what extent the vehicle is autonomous and when should the driver interfere.

When the vehicle enters a mode when it is no longer able to operate by itself according to its (ODD), it goes into the

This criterion requires manufacturers to document what the vehicle would do when it is no longer in control. Will it pull over or will it do something else? This step is critical because it minimizes the unpredictability in the vehicle’s behavior.

refers to the vehicle’s interaction with humans and the surroundings. It marks the need for manufacturers to consider how vehicles will signal their needs and intentions. The policy questions the necessity of driver engagement because human’s capacity to stay alert diminishes when disengaged from driving responsibilities.

draw attention to the ethics behind computer decision-making and its power over human decisions. As the policy states, there are three main objectives for most vehicle operators – safety, mobility, and legality. There are, however, instances when two of these may conflict.

Imagine if a car double-parks in a two-lane road and blocks the way of the autonomous vehicle. What would it do? In this case, the mobility objective comes in conflict with the other two. There are several ways that the autonomous vehicle could react compromising either of the objectives. This, however, may lead to unsafe situations. This is why regulators require manufacturers to document each of these possibilities and decision events.

In addition, all manufacturers of fully automated vehicles are advised to design their systems to accommodate people with disabilities. The DoT stresses the importance of including this population group that previously had very limited options for driving and traveling. It is good to see that the DoT is not only clarifying some of the bigger concerns regarding autonomous vehicles but is also working towards making them available to more people.

The second section of the policy addresses the division of responsibilities and authorities between the federal and state governments. It suggests a model policy states can adopt to facilitate the presence of automated vehicles on the roads.

The policy states that the Federal government will retain their authority to set and enforce safety standards, communicate with the public about safety, and occasionally issue guidance about how to meet national standards.

The Model framework was created in collaboration with the American Association of Motor Vehicle Administrators (AAMVA). It marks where new issues fit within the existing federal/state structure. The goal is to ensure the establishment of a consistent national framework rather than a group of incompatible laws that only confuse manufacturers, passengers, and vehicles.

This discussion outlines NHTSA’s current tools for regulation that can be used to ensure the safe development of new technologies: interpretations, exemptions, notice-and-comment rulemaking, and defects and enforcement authority. The DoT promises to take each of them very seriously. The legislators promise to decrease the time to issue interpretations and to rule on exemptions. The timeline for issuing simple HAV-related interpretations and ruling on simple HAV-related exemption requests is 60 days and six months respectively. Previously, these time frames varied from several months to several years.

NHTSA also prepared a new information and guidance document, which aims to help the regulated companies and the public in understanding the use of the existing tools.

A decade ago autonomous cars were mostly a vision far in the future. (Of course, that is if we don’t consider the ambitious self-driving vehicles from the past that never made it to the present day.) So it would be silly and naïve to think that the current regulatory tools are enough for regulators to ensure the safe introduction of autonomous vehicles. The speed with which HAVs are advancing, along with the complexity of these innovations is outpacing what the DoT currently relies on. That’s why they are considering entirely new regulatory tools and procedures.

Some of the new tools applied to the are pre-market safety assurance tools. They may include pre-market testing, data, and analyses reported by a vehicle manufacturer or other entity to DOT.

Another consideration would be to remove the process of self-certification for automakers and to establish pre-market approval authority. DoT is also considering an extreme mode of power, by which it could tell a manufacturer to immediately halt production if some unanticipated safety concern becomes evident.

Some of the new tools the legislators have been considering may create disapproval among automakers. They raise many challenges and create changes in established processes both for automakers and tech engineers. Yet, for now, the Department labels these suggestions just as “discussions.”

You can read the full Federal Automated Vehicles Policy here.