Porsche 911: The greatest sports car ever

The first 911 model was released in 1963, at the Frankfurt Motor Show. Ever since it has held a special place in the hearts of car enthusiasts. Over the years Porsche 911 has gone through several modifications. The car marque has always aimed for perfection while leaving the model’s core concept intact. Throughout the years, in spite of all the innovations, the identity and philosophy of Porsche remained the same.

Today, Porsche 911 continues to be luxurious, yet balanced; classy, yet modern; sporty, yet practical; fast, yet reliable.

The 911’s worldwide popularity is an undeniable fact. In 2015, the American magazine for car enthusiasts ‘Car and Drive’, named the 911 model as ‘one of the best sports cars available’. Moreover, the different iterations of the model such as Carrera, Turbo, Targa, GT, R, and S have been rated near perfection. Even a critical car expert such as Top Gear rated it with a 9 out of 10.

The magic of the Porsche 911

Ferdinand Porsche once said, “The 911 is the only car you could drive on an African safari or at Le Mans, to the theatre or through New York City traffic.”

Throughout the years, the brand kept faithful to this vision. No wonder the 911 model has gained such popularity. We can even say the model has become the soul of the company. This remarkable, drive-everywhere car shines equally bright speeding through exotic destinations and gliding in everyday traffic. After all, why buy a sports car if you cannot drive it anywhere your heart desires?

Today, many high-performance cars turn into garage queens, while their owners drive boring vehicles as their daily riders. Well, the good news is that your everyday drives can be made more exciting with the Porsche 911. How?

The key lies in a combination of the rear-biased weight distribution, a powerful boxer engine, and unique classic design.

As I mentioned earlier, Porsche 911 has quite a powerful signature rear-mounted flat-six engine. The magician-technicians at Stuttgart factory kept increasing its power, without compromising the identity of the car. As the engine is one of the core elements responsible for the performance of Porsche 911, let’s take a look at its evolution.

In 1964, the engine was a 2.0-liter, air-cooled SOHC flat-six with a modest, yet comparatively high horsepower of 148. By 1969, the horsepower rose to 190. In addition, all the engines switched to magnesium blocks instead of the aluminum ones.

Due to increasing emission standards in the US, the company had to find technical solutions, which would lower compression without compromising the horsepower. That was the time when the flat-six displacement increased to 2.4 liters. Later in 1973, the Carrera model was introduced and the engine became 2.7-liter flat-six.

Until 1986, the major engine changes included the addition of the turbo and a 3.2 liter’s output to 217 horsepower. After, modifications were made to the body of 911, giving birth to the C4 version of the model. By the end of this vehicle generation, the 3.6 liters-six flat had already made the Carrera quite expensive, exceeding $100’000 mark.

The year 2012 marked another engine milestone, as it reached 500 horsepower. Moreover, the titanium connecting rods, the higher-flow air filter, and direct fuel injection added more value. These are the features of a high performing sports car. Definitely, the 911 engineers are quite serious when it comes to engine and its performance.

Driving a sports car is about speed and performance. But at the end of the day, we want to have fun and be safe. Indeed, reliability, balance, and safety are some other key ingredients of the Porsche 911 magic.

To begin with, the 911 powerful engine and reliable engine, which has never failed and has endured for a long time. Moreover, the interior design and the screens are equipped with the technology that ensures accuracy and quick on-time responses. This is quite important as it allows the driver to take proper measures in case of an emergency.

The Porsche 911 also has night vision assist and autonomous braking that even has pedestrian detection. The updated suspension quality and the different modes ensure for a fun, yet balanced driving experience. One is the Wet Driving Mode, which activates when the car is driving on a moist surface, to enhance stability.

A Porsche 911, be it Carrera, GTS, or Turbo is easily recognized anywhere. Despite the upgrades in the engine and in its interior, the automaker has preserved the major exterior features of the Porsche 911.

The design has managed to remain iconic and is characterized by a blend of exquisite design, class, and modernity. When new Porsche 911 models are designed, the future and the past are craftily weaved into each detail. By taking into account the past designs, the car has managed to stay true to its identity.

The body design is sporty, a tad aggressive, with convex and concave lines. Nevertheless, it simultaneously manages to somehow stay friendly. The interior is elegant, with premium quality materials, yet it is also practical, with lots of storage space. Definitely, this car is all about proportionality and balance.

Today, the car marque offers different 911 models. They belong to different categories from the basic Carrera to Carrera S, Turbo, GT3, GT2 RS, among others. All of these models have been upgraded for 2019. Let’s take a look at the major distinguishing features.

The latest generation of Porsche 911 features engines ranging from a 3-liter H-6 to 4-liters H-6. The horsepower also ranges from 370 to 580 depending on either the base engine or the 4.0 cranks. This powerful engine would not stand in such a small car if it was not for its unique weight distribution.

The acceleration is also impressive with reaching 60 mph in less than 4 seconds. The steering has further improved, becoming smooth, almost perfect in accuracy, especially during sharp turns. You will not even feel any car cracking or shaking, due to a wonderful suspension system that balances it out.

The new generation of Porsche 911 offers a fresh take on a classic design. The model now features a new structure with a greater amount of aluminum allowing better weight distribution. Rare-wheel steering has been added to Carrera and Carrera S versions for improved high-speed stability.

Moreover, the front of the model is now wider, with longer, forward-extended hood. The new headlights have a more rounded shape, with matrix LED tech on some models. The exterior mirrors have been restyled and enlarged for optimized visibility. For better aerodynamics, the door handles now sit flush with the body.

All safety and reliability elements have been upgraded in the 2019 Porsche 911, following the latest technological developments. For example, the Porsche Active Safe feature activates the emergency brakes when in danger, in order to prevent a car crash.

Also, Porsche Car Connect will automatically dial emergency contacts in case of an accident. These added features suggest a stronger monitoring system with an emphasis on collision prevention.

Not that many people know, the original label was 901. However, after a copyright claim from Peugeot, the automaker could not use three-digit numbers with a zero in the middle. Unfortunately, at that time, all the marketing materials for Porsche 901 were already made. Therefore, changing into 911 seemed like the most practical option.

As one of the best sports cars the world has ever known, the Porsche 911 continues to win the hearts of regular people and celebrities alike. The car has been a long time favorite of collectors like Jay Leno and Jerry Seinfeld. Other famous personalities you can spot behind the wheel of 911 are Arnold Schwarzenegger, Lindsay Lohan, Matthew Perry, Tom Cruise, David Beckham, and Ellen DeGeneres. 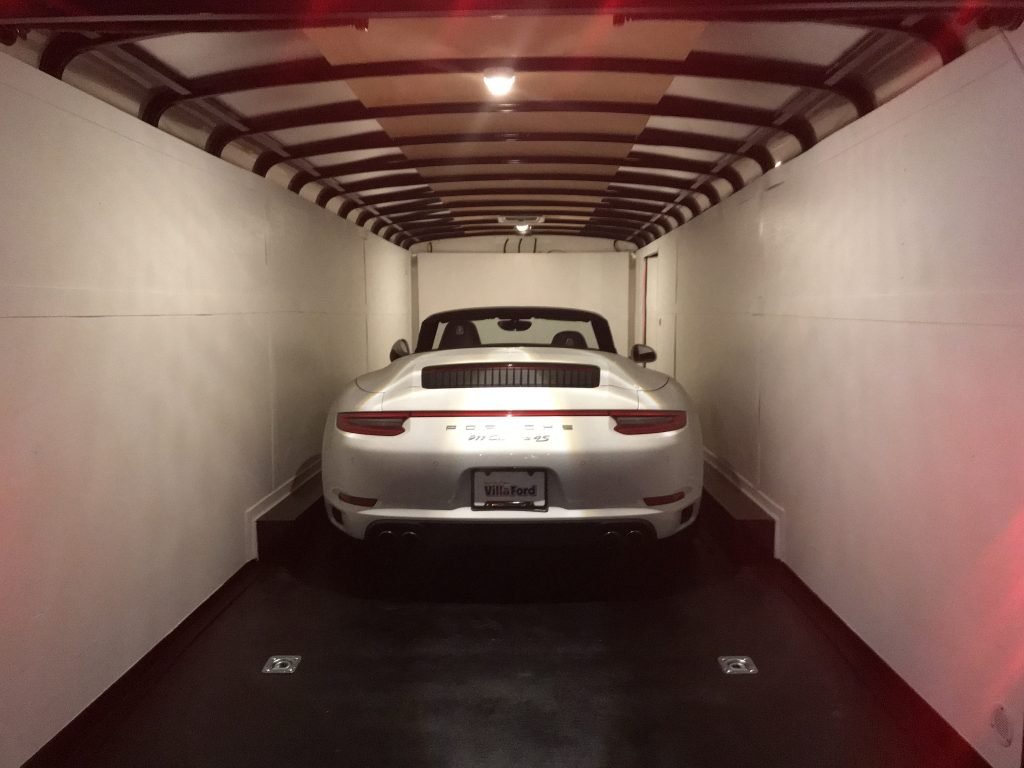 Porsche 911 is an exquisite vehicle that comes with a hefty price tag to match. The latest 2019 Porsche 911 starting prices can go up to $293’000 for a GT2 RS. Thus, in order to ship this vehicle anywhere your heart desires, especially over long distances, hiring an auto shipping company seems to be the best choice.

After you have decided that shipping is worth it, the next step is to find a reliable auto transport company for your Porsche 911. There are certain criteria to consider, such as the company’s experience with shipping sports cars, compliance with laws and regulations, costs, and other customers’ feedback.

Corsia Logistics has successfully shipped several Porsche 911 models. Although we do recommend enclosed carriers for extra protection of your vehicle, the open carrier is always an option.

If you have questions about moving your Porsche from Los Angeles to Boston or anywhere else in the U.S. or need a quote, get in touch with us via our contact form, chat, or phone. Our logistics experts will provide you with a manually calculated quote and offer vehicle shipping solutions customized for your car. Let us ship your legend!