Shipping a Car from Chicago to Miami Guide

Learn how auto transport works. Review our guide below and contact us with more questions. Request a quote online or call!

Shipping a car from Chicago to Miami should not be a hassle. For a stress-free experience, take some time to understand the basics of auto transport. In this guide, we’ll share our expertise and go over the key points of vehicle shipping. Please, do not hesitate to call us though! Our experienced logistics agents will be happy to walk you through the steps of the car shipping process and help you select a service.

What are my options when shipping a car from Chicago to Miami?

When you need to move a vehicle from one location to another your two main option are – driving the car or shipping the car.

DRIVING
Driving from Chicago to Miami would be a great option if you have plenty of free time, enjoy being behind the wheel, and want to see as much of the country as you possibly can. Road trips are also great because driving can be a sort of meditation. It takes your mind off everything else and forces you to focus on the activity of driving. Driving long distances, however, is not for everybody. When the distance is greater than 200 miles, we recommend shipping your car instead of driving it.
SHIPPING
Hiring an auto transport company saves you time and spares your car additional hundreds of miles of unnecessary wear and tear. Driving from Chicago to Miami means adding over a thousand miles to the odometer, oil change, flat tires, and other possible issues. Shipping, on the other hand, is often cheaper than driving, once you consider all the expenses a long road trip entails.

You have to choose based on the type of carrier and on the time frame of delivery. Corsia Logistics provides the following car shipping services:

OPEN OR ENCLOSED
Your choice of carrier type should really be influenced by the type of vehicle you need to ship. Standard everyday sedans, such as your Honda Civic or Toyota Corolla usually go onto an open-air trailer. If you need to ship a high-end sports or luxury automobile, or any classic vehicle you should choose enclosed trailer. Enclosed auto transport offers complete protection from weather and road elements.
STANDARD OR EXPEDITED
A standard car shipping service usually means that a carrier will pick up your vehicle within one to few days. Delivery, in this case, from Chicago to Miami would be 4-6 days. However, please keep in mind that all dates and times are only estimates. Carriers are picking up and dropping off shipments, hence, delays may happen, due to weather, traffic, or other customers’ postponements.

Expedited delivery could guarantee that your car is picked up or delivered on or by a specified date and time. This, however, requires the whole schedule of the truck to play around your schedule, which naturally increases the price.

How much does it cost to ship a car from Chicago to Miami?

The price from and to any destination is never a constant, a flat rate we can state right now. Several variables decide the final cost of shipping a vehicle. Vehicle make and model together with the distance set the base price for shipping. Then the choice of carrier type enters into the equation. Shipping a non-running car drives the price up due to additional equipment. Picking up and delivering a vehicle to and from a rural area is a logistical challenge that usually costs more. However, the deciding factor of all is the current supply and demand situation on a given route.

VEHICLE MAKE & MODEL
Smaller cars are always cheaper to ship, while bigger, heavier vehicles are more expensive. Auto transport carriers have a weight limit that they must observe when accepting vehicles. Thus, the make and model of your vehicle, as well as any modifications done to it, and whether there will be any personal items loaded inside, all matter for the total weight of the carrier. This then impacts your final shipping price.
TRANSPORT TYPE
The type of carrier you choose affects your rate as well. Open auto transport is the standard shipping method in the industry. It is used for all vehicle types, availability of open carriers is much higher and prices are cheaper. Enclosed auto transport is more expensive and often used for sports, luxury or classic automobiles.
DISTANCE
The distance always affects the price of shipping. The longer the distance the less it costs per mile, but that is never the decisive factor in the final cost. Shorter distances still consume gas and require the same amount of work, but in the end, it is fewer miles traveled. This means that shorter distances often cost as much as shipping a car across the country.
LOCATION / POPULATION
Auto transport to and from rural areas could be more complex and challenging. Fewer auto haulers are willing to go to remote towns and villages to pick-up or deliver a single vehicle only. This often means higher prices and a longer wait for pick-up, or delivery. The majority of truck drivers prefer to travel to major metro areas where loads availability is higher.
VEHICLE CONDITION
To ship a non-running vehicle we need a truck that can winch it onto the trailer. This requires more work, more time and a special truck. A fitted carrier and special skill set means a higher rate. In some cases, we may even need a forklift to load a fully inoperable vehicle, which additionally increases the price.
SUPPLY & DEMAND
The basics principles of supply and demand are known by most people, and they apply in the auto transport industry as well. When supply is higher than demand, prices drop, but when demand is higher prices go up. In auto logistics, when demand is high the truck space is limited and this means the prices increase. That is why a quote is good for one week only because demand changes on almost every route.

Moving to the Capital of Latin America 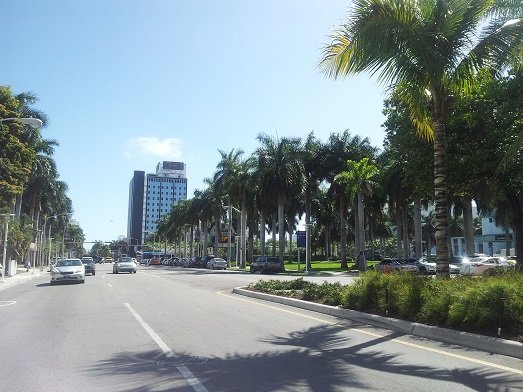 The vibrant and energetic city of Miami is one of the most popular destinations for snowbirds and all who prefer a warm climate and laid-back lifestyle. As someone moving from Boston, you will be able to enjoy not only the year-round tropical weather and relaxed lifestyle of Miami but also its delicious food and breathtaking beaches.

If you speak Spanish, you are in luck as the first language of over two-thirds of the population is Spanish. The majority of Miami inhabitants speak both Spanish and English, while overall, there are more than 80 different languages spoken. This major port city is the seventh most populous in the US, with over 2.7 million people living in Miami-Dade County. It also has the third tallest skyline in the United States.

As a soon-to-be Miami resident, get ready to put up with heat, humidity, and flooding. In contrast to Chicago’s cold and snowy winters, Miami has a tropical monsoon climate with short winters that are mostly dry and warm. Its summers are hot and humid, while the hurricane season runs from the beginning of June until the end of November. It should sound exciting!

Even though Miami’s neighborhoods do not differ from one another, as dramatically as those of Chicago, they all are unique. The perfect mix of palm trees, clear skies, and Art Deco architecture makes Miami one of the best places to start a new life. With 25 neighborhoods and 40 “sub-neighborhoods”, it might be quite overwhelming to pick the right place. So, take time and do your research.

Miami is the 8th most expensive city in the US when it gets to rent. Therefore, expect housing prices to be much higher compared to Chicago. The living costs in Miami are 11% more expensive than in Chicago, while the median home cost is 44% more expensive.

For the last two decades, the Port of Miami has been widely known as the “Cruise Capital of the World.” It is the busiest port in the US for both passenger and cruise lines. The city is also a major commerce, finance, and international trade hub and an important center of culture, arts, media, and the entertainment industry.

The Metropolitan Miami ranks second in the US for tourism. And Downtown Miami is home to some of the largest national and international companies, and it also has the largest concentration of international banks in the States. If you are going to look for a job in Miami, consider applying in any of these companies: Telemundo, Univision, American Airlines, Cisco, Disney, Exxon, FedEx, LEO Pharma Americas, Microsoft, Yahoo, Oracle, and Sony. There are plenty of government job opportunities at miamidade.gov as well.

Things to see and do in Miami

Miami also has over 800 parks including national parks such as the Everglades National Park and the Biscayne National Park where you can spend time with your favorite people or just go for a run to clear your head.

Moving to Miami with your car

As a new resident in the city of Miami, you will have to register your vehicle or vehicles with the Department of Highway Safety and Motor Vehicles (DHSMV). Please keep in mind that before registering your vehicle, you will have to get a Florida driver’s license, purchase a Florida auto insurance, and complete a VIN inspection and odometer reading. Visit the official website of Florida DHSMV for more info.

Good luck to you and congratulations on your moving to Miami. If you still have any questions about shipping your car from Chicago to Miami, please call or email us. You can certainly just request an auto shipping quote online. Thank you!