Shipping a car from Florida to Texas Guide

Shipping a car from Florida to Texas is easy. In our guide we answer important questions about the process. For your peace of mind you can always contact Corsia team by phone, chat or simply by requesting a quote online.
Request your free car shipping quote online or call to speak with one of our logistics experts!

How to choose a car shipping company?

When searching, you will find the following entities: carriers, brokers, lead generator websites and auction websites. We recommend you to stay away from the last two.

Whether you choose to work with a broker or carrier, make sure it is a reputable partner. 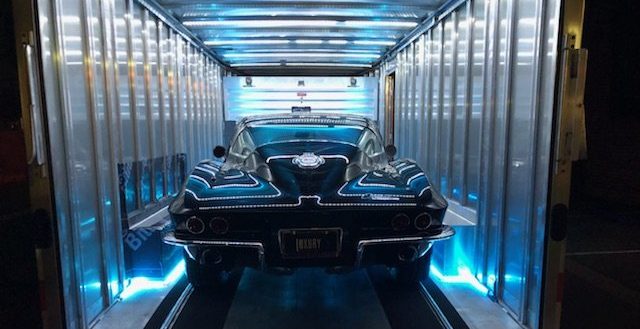 All honest companies will be transparent with you about their process. They understand that in business, as in life, successful relationships run on trust.

How much does it cost to ship a car from Florida to Texas?

A few factors contribute to a vehicle’s shipping price. Let’s take a look at what they are:

When we calculate prices, last but not least comes  current supply and demand. All routes in the US are affected by seasonal peaks and drops. Such happen when ‘snowbirds’ season starts and ends..

Supply and demand usually determine the final cost to ship a car. Fluctuations happen daily and only a current market price can guarantee timely and professional service.

Our team tracks supply and demand fluctuations constantly. This enables us to quote a realistic current market price that will ship your vehicle now.

What services does Corsia offer?

Whichever service you choose, it will be a door-to-door delivery. Very rarely we ship cars from and to a terminal. Most individuals and businesses across the country prefer door-to-door auto transport.

The other options you’ll need to consider is whether to pick a standard service or an expedited shipping. The distinction between the two is the time of delivery.

Standard service usually means that a carrier will pick up your vehicle within one to few days, and deliver it from Florida to Texas within 3 to 5 days.

Expedited delivery could guarantee that your car is picked up or delivered on or by a specified date and time. However, to accommodate your request, the whole schedule of the truck will have to be planned around your schedule. This means higher price.

We do not need any documents from you, unless you are booking international auto transport. You or someone on your behalf will need to release the vehicle, together with the keys, to a carrier at pick up and sign the Bill of Lading (BOL). BOL is not only a receipt but also an inspection report.

Moving to the Lone Star State

Due to its constant job growth, affordable housing, rich culture, and diverse cities, Texas has been attracting more and more people from all over the United States.

Located in the South Central region, Texas is the second largest state in the US in terms of area as well as population which has reached over 28.3 million people. Thanks to its great size, the state offers diverse landscapes.

Although Texas is associated with the southern deserts, the latter only cover 10% of its land area. Its name comes from the word ‘taysha’ in Caddo language and means ‘friends’. And as a former independent republic, Texas is often called the “Lone Star” state.

As Texas is spread out it falls into multiple climate zones. Depending on where in Texas you will decide to move, the weather will vary to a great extent. The Panhandle, for example, is colder compared to the Northern part of Texas and faces snowfalls multiple times every winter. If you don’t want to face harsh winters, you should definitely choose the Gulf Coast part which is characterized by mild winters.

The state’s precipitation patterns also vary a lot from one part of Texas to another. Moreover, you will have to put up with the dry heat and high temperatures that characterize the state no matter which city you’ve chosen to call home.

If Texas were a country, it would rank in the top 10 largest economies in the world. Thanks to its key industries cattle and bison, timber, cotton, and oil, which shaped the state’s economy before the World War II, Texas has managed to lead as the state with the highest export revenue since 2002.

During the mid 20th century, the state invested heavily in universities and high technology and created a diversified economy. To this day, Texas has the US’ second-highest GSP (gross state product) which reached $1,599 trillion in 2016.

Home to 54 500 Fortune companies, the state is one of the leaders in several industries such as energy, aerospace, agriculture, computers and electronics, petrochemicals, and biomedical sciences. Leading in so many industries, this business-friendly state is also one of the strongest in terms of job growth.

Between the year 2005 and 2013, it used to attract hundreds of people per day thanks to its great job creation. Its unemployment rate has also been going down in the past decades and reached 3.9% in December 2017, 0.2% lower than the national average.

Affordable housing is yet another reason why a lot of people are moving to Texas. Living costs will depend a lot on where in Florida you are currently living and where in Texas you will move. If we compare Dallas to Orlando for example, Dallas is 1% cheaper than Orlando, while median home costs are usually 6% cheaper in Dallas.

If you are living in Florida’s capital Tallahassee and want to move to Texas’ capital Austin, be prepared for a great increase in your living costs. Austin is 24% more expensive than Tallahassee and median home costs are  90% more expensive in Austin. If you still haven’t decided on which city to move to in Texas, we would highly suggest you pick between these eight fantastic cities: Austin, Dallas, Fort Worth. Frisco, Houston, Pearland, Plano, and San Antonio.

Things to see and do in Texas

The state of Texas is a paradise for barbecue and nature lovers. Take the chance to walk in the footsteps of dinosaurs at the Texas’ Dinosaur Valley State Park, see the sea turtles at the Padre Island National Seashore, enjoy its thriving live music scenes all over the state, its rich history, culture, and interesting people whenever you can.

Texas cities are full of national parks as well and offer great opportunities for hiking, camping, cycling, and many other activities.

Moving to Texas with a car

Once you move to Texas with your car, you will have 30 days to register it. Before you proceed with any other documents, make sure you have proof of auto insurance and car inspection. Texas DMV does not issue driver’s licenses. To transfer your out-of-state license you’ll need to visit the Texas Department of Public Safety within 90 days of establishing your move.