The Cities with the Worst Traffic in the USA

Next time you need to drive to your next business trip or you choose to take a last-minute summer road trip before the sunrays hide behind the clouds of autumn, make sure you avoid driving in any of the cities mentioned below! Traffic jams can occur at any time of the day and usually cost us a fortune –in terms of wasted time and fuel, but also anger, anxiety and lost productivity.

Inrix, a global software company providing road traffic and drivers services, conducts a research on traffic congestion in the world’s largest cities and metropolitan areas every year. According to this year’s results, traffic congestion has returned to its pre-recession rates. The Urban Mobility Scorecard Annual Report takes into consideration each country’s economic situation and transport infrastructure in addition to the average traffic speed of individuals to arrive at a list of the worst traffic corridors – both in the USA and in Europe.

In the United States, the 2015 Report shows results on the traffic congestion from 471 urban areas where both business and individual drivers were included in the analysis. Even though we have institutions and programs working towards improving driving conditions and decreasing the effect of traffic on our wallets, and the environment, we can see that for the past 30 years the cost of traffic congestion in the country has been increasing significantly (in 1982 – $42 billion, in 2000 – $114 billion, in 2014 – $160 billion).

On top of that, drivers in the 10 worst corridors in the USA spent about 84 hours on average per year in gridlock. This is the equivalent of 3.5 full days of stillness and is 2 times the national average. Overall, in 2014 the wasted time in traffic congestion in the country amounts to 6.9 billion hours of extra time. It would take us less time to drive to Pluto, if there was a highway across the galaxy, than to sit and wait (impatiently) in our cars. Over 3 billion gallons of fuel were wasted only from congestion in 2015 – a number the EPA will not be happy about at all.

Take a look at the top 10 of the worst traffic corridors in the USA and the traffic values that correspond to them here:

Earlier this year, another survey determined the top 10 cities with worst traffic. The annual traffic index conducted by TomTom, the Dutch navigation system producer, measures congestion levels across 218 cities worldwide. The company uses data from their own historical traffic database, which they claim to be one of the largest ones in the world. The results are reached by measuring travel times during the whole day and comparing travel times during non-peak hours and peak hours. The difference is expressed as an average percentage increase in travel time, and this is the basis for the ranking. The 10 cities with the worst evening traffic congestion are:

Based on the results from the above-mentioned reports, we can “proudly” give the award for worst traffic congestion in the USA to… The city of Angels. Even though it is Washington that holds the highest rank in annual average hours in traffic in Inrix’s Scorecard Report for 2015, Los Angeles is right behind only 2 hours less. Even though L.A. ranks second, its 80 hours are over 15 hours more than the amount of time the city recorded a year ago. In 2014, Los Angeles occupied the first place in the Inrix Scorecard with a total of 64.4 hours that citizens spent in traffic in 2013. This number is 5 hours more than the year before when in 2012 LA was again the city with the worst traffic. In addition to this, we can point out that among the top 10 worst traffic congestion corridors from the Inrix Scorecard, six are in Los Angeles.

L.A. is also present in the top 10 cities with worst rush hour globally as TomTom’s report states. Even though it is the only American city among the first ten, Los Angeles scores very close to several European cities that rank ahead of it. If you travel daily across LA, you are very likely to waste additional 25 minutes only due to the delay, making your usual 30 minute commute jump up to nearly an hour. With estimated 230 work days per year, this will add up to 95 hours annually. This is the equivalent of two full weekends of your life. Instead of sipping Margaritas somewhere in Acapulco, L.A. traffic makes you waste your money and time on nothing else but immobility.

If there is one thing you need to remember from all these statistics, it should be this: avoid driving through L.A. any time near Valentine’s day! February 14 was the specific day with the highest congestion levels in the area. Even if you possess one of these most romantic cars and want to take your sweetheart on a trip to remember… Better wait for another day to do so! Also, try to use the public transport on Thursday nights as this is the day of the week that showed the evening peak congestion level in TomTom’s report.

As a conclusion, we can advise you one more thing: If you ever need to pass through Los Angeles during rush hour, make sure you invest in a good audio system, maybe even the RA:1K , because you might be stuck in stillness for hours! 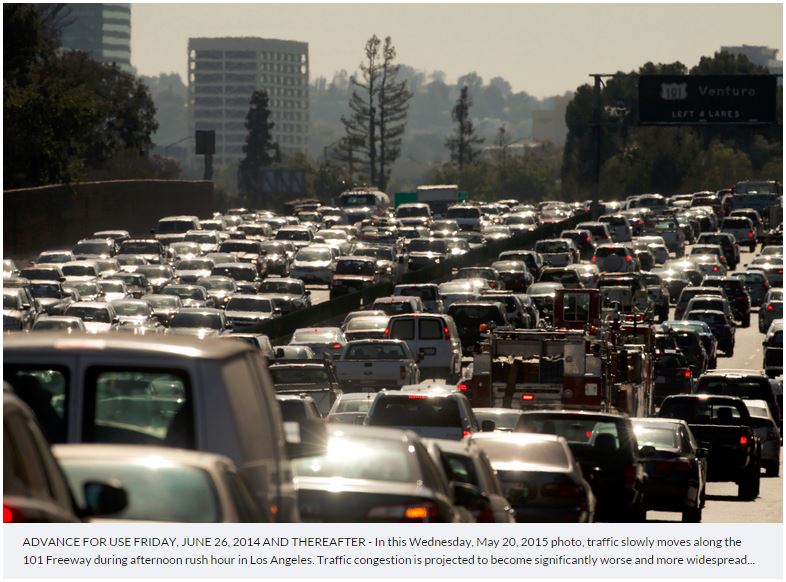 Traffic congestion has become such a big problem in major urban areas of the country that citizens need to devote more than twice as much travel time than if they would need to arrive on time just because of minor irregularities that might occur on the road. Naturally, this makes people more depressed and less productive in the time they have left for other activities.

The point of showing publicly the cities with worst traffic congestion levels are not to embarrass or humiliate the city officials. Exactly the opposite. Road authorities should use the information these surveys provide to evaluate the performance of their network, to improve traffic conditions and guarantee better traffic flow, and also think about the public transport and how to improve it. What such reports aim to do is invite the U.S. to dedicate more capital to developing infrastructure. Public transportation in urban areas should be improved in order to compensate for the effect population growth and economic growth prove to have on traffic congestion. If authorities stay idle, they will soon see the effect of their inactivity not only on the road but also in people’s lifestyle and mood, and especially in the environment.

The Inrix Scorecard Report estimates that if trends continue, in 2020 the national congestion cost will have grown from $160 billion to $192 billion. The average commuter’s congestion cost will grow from $960 in 2014 to $1,100 in 2020. Now, let me start counting the things I could buy with these money while I sit in my car in downtown L.A.