The People Behind The NASCAR Haulers

Excitement and adrenaline is always expected when we watch the NASCAR races. We never think about how the cars got there. It would certainly be a distraction and waste of time. But if you think about it now, would you say you have seen a NASCAR car on the road from Tennessee to Texas? No. Even if a race car could be driven on a highway, teams would never want to see their vehicles wear out unnecessarily before the race. These cars are too unique to expose them to such a wasteful experience.

That’s why each team has a group of carefully selected drivers who operate the Nascar auto haulers. Transport of the race cars is one major task for some trusted and reliable auto transport companies. Let’s learn more about the auto haulers who get the job done.

The People Behind the NASCAR Haulers

Teams invest plenty of time and resources to prepare for each race. They build new cars and parts for each new track to get maximum performance. The hard part comes after this, however – before each racing event they must swap the old and new cars back at their home base. It may sound simple, but the task requires high responsibility with too little time and security.

Many would call that a true nightmare. Yet, the NASCAR team haulers are truly dedicated. They go through what others consider a logistical nightmare just to make the race possible.

According to a large part of NASCAR employees, this is the worst job.

“The toughest job in the sport is the one that more people say, ‘Oh I could do that and I want to do that,’” says a driver and former team owner Brendan Gaughan. “Truck driver is the toughest job in our sport. It’s not just getting the truck from here to there, there’s so much (more) to driving a big rig in our sport.”

The commitment to transport special cars

The NASCAR hauler drivers look after the trucks and their cargo. That’s why they usually devote twice the time to transport the cars. They count in extra time in case of break downs or an accident that could change their routes.

Sometimes the NASCAR haulers are on the road for weeks in a row. The people behind the wheel do not see their families in the name of the race. This is the true commitment to an end goal, and they make everything happen to deliver the expected. Even at a cost of facing a few bird-flippers on the way to deliver Kyle Busch’s hauler for Hendrick.

There are plenty of ways NASCAR truck drivers show their commitment to the job. Once they get to the new race location, they quickly put on new clothes and get down to another task. One can often see a NASCAR big rig driver checking the mechanics in a race car or cooking for the whole team. And many gladly assume the responsibility for buying food and supplies as well. People call the Nascar team haulers “the ever-running workhorses of the industry”

Probably the scariest thing about this job is how much equipment you are actually transporting. When we see the bright and colorful NASCAR haulers, we don’t always think about the value of whole cargo inside. Most NASCAR teams value the contents of a truck at around $2-3 million. Some insure it for as high as $5million, where every single detail and spare part adds up to the total. Even the gear for the crew on the race day. If one piece of equipment is missing when the hauler gets to the final destination, guess whose fault it would be? Not the guy who took out the part, but the driver’s who is not aware of what he carries in his truck. The auto transport insurance is one major element when shipping a car. 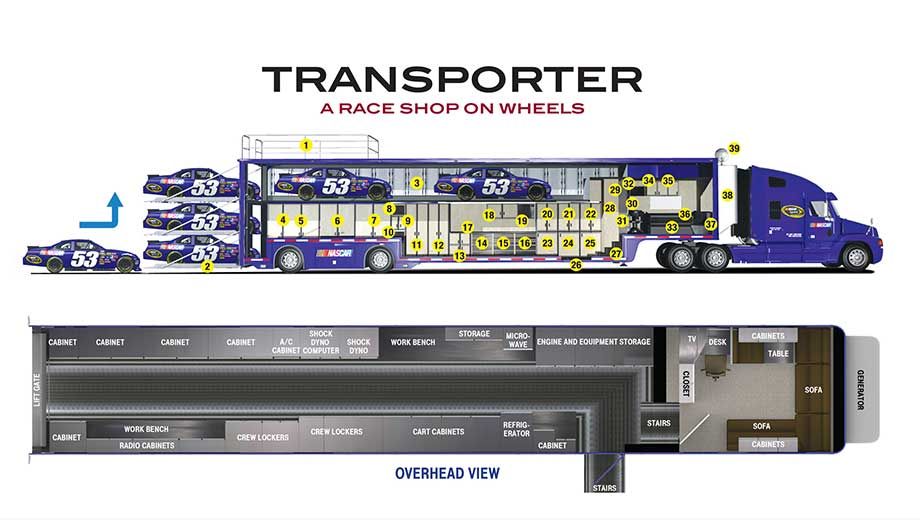 Although the NASCAR haulers receive little attention and enjoy virtually no fame, the reality is that they are a crucial, integral part of each racing team. Even if we don’t see them along with the racers every time, they are there, at the basis of the whole crew. So next time you see a NASCAR hauler with a number on the side, give the driver a silent vote of appreciation. This goes for every auto transport carrier driver. Their job is not easy and we must appreciate what they do actually try to understand that it is a stressful job to be on the road for weeks. It requires hours of driving, loading and unloading and customer service. Thus, don’t be surprised by the cost to ship a car. This is a heavy duty job and it deserves its pay. To learn more about auto transport browse our website and car shipping tips section of the blog. To discuss a booking call (818) 850-5258 or request a car shipping quote online.