The plight of the US infrastructure

The infrastructure in the US is a topic widely discussed at the moment. In general, every year, around that time when the Infrastructure Report Card is released, by the American Society of Civil Engineers, a.k.a. ASCE it becomes a topic of national coverage. It is not surprising that this year the release of the Report Card was what stirred up the pot again. The grade this year was D+.

For the moment one thing that all politicians and governmental institutions seem to agree on, is that the infrastructure in America is old and needs ongoing maintenance, reconstruction, in some cases complete replacement. Yet, no one has been able to figure out where to get all the funding needed to accomplish all this.

The fact is that the US infrastructure is more expensive to maintain, rather than to replace altogether!

The Highway Trust Fund (HTF)is a transportation fund, which is the main contributor, when it comes to infrastructure maintenance and repairing. The HTF receives money from the Federal Fuel Tax of 18.3 cents per gallon on gasoline and 24.4 cents per gallon of diesel fuel and related excise taxes. The last change on fuel taxes was in 1993, however a lot has changed on the infrastructure scene since then – there are more and more bridges and roads to be maintained (new ones or the gradually aging existing ones), which has led the HTF’s resources to dry out.

When the question of raising fuel taxes is brought up, however, no one wants to pay more to the government…at the same time, we all enjoy our 6 cylinder monsters on the road.

Of course, the increase in fuel taxes would not only affect the everyday people, but businesses as well. You can take a look at our article discussing how the cost of shipping a car is being calculated and what factors can influence the rates. In order to understand how difficult the situation is, we need to understand what exactly is going on and how important the state of the US roads, bridges, railroads, seaports, airports and public construction is.

In the state of Alabama alone there are more than 2000 dams, and the state itself does not have an inspection agency, not to mention that most of the dams are more than 50 years old and are in desperate need of repair, according to CBS 60 minutes. We also have more than 70 000 bridges in the US, equaling 11% of all bridges that have been classified as structurally deficient, i.e. dangerous! According to Andrew Herrmann, a former President of ASCE, there are more than 4 000 bridges in metropolitan Pittsburgh and 20% of them are structurally deficient, while most of them are at the “end of their useful life.” Pittsburgh is known as the city of bridges, so it is a shame that main bridges such as the Liberty Bridge, which serves as a connection from the South to the City and then to the North, was built in 1928 and designed to last 50 years….well, we are way beyond that and the bridge is still there crying for repair. Funding, however, is just not enough.

In Pittsburgh, they had to build a bridge under a bridge to collect the falling concrete from the bridge above, so that it won’t fall on the traffic below. I suppose that the lack of funding stimulates creativity, when it comes to resolving issues, but the problem is that the issue is not resolved and the bridge is still a dangerous place to go through.

It’s happening across the US.

Even though, Pittsburgh stands out with the amount of bridges it has, it is far from being the only city with infrastructure problems. In New York, the Tappan Zee Bridge, which crosses the Hudson River at one of its widest points, is very often referred to as the “Hold Your Breath Bridge”, because of the amount of shakiness you experience while on it.

In Philadelphia, according to CBS 60 minutes, there are more than 9 million people going over 900 structurally deficient bridges on a daily basis. The number of potholes on the roads, cracks and corroded steal on bridges all over America are increasing and have caused numerous accidents, some of which have caused people’s death. For instance, the I-35W Mississippi River Bridge that collapsed in 2007 and caused dozens of cars together with their occupants to end up in the river under the remains of the bridge.

“Infrastructure is not interesting” or that’s what most of the politicians have been saying lately, some even called it “not sexy”, however as always they are wrong. Infrastructure is interesting, because it is important. It is important to people’s well-being, to business development and the economy as a whole. It is what keeps us going, helps us to stay competitive on an international level, and as we can see from the Global Competitiveness Report, in terms of infrastructure the US is falling behind many developed countries.

More importantly, though, the infrastructure’s reliability is something that shouldn’t have to be questioned, period.

And it is not questioned, it is a widely known and slightly “accepted” fact that the infrastructure is suffering, especially when it comes to roads and bridges. The trucking industry is the one industry most affected by this problem. And when the trucking industry is having problems, this affects all other aspects of our lives. It leads to increase in costs due to delays, increase in time needed to get to a location, increase in fuel consumption when a detour needs to be taken.

America runs on trucks and that’s a given, the least the government can do is provide them with safer roads and bridges to drive on.

Yet, ports are suffering too.

According to Gregory DiLoreto, president of the ASCE, 95% of the goods are coming in and going out of the US through the sea ports, however, the sea ports are outdated, aging and are raising a lot of reliability issues. All this causes unscheduled delays for ships, which drives up the cost and slows down the delivery times. According to Jerry Bridges, former chairman of the American Association of Ports Authorities, the harbors need to be deeper to allow ships to enter and exit fully loaded and in general to be able to accommodate larger loads. Another feature that needs improvement in the sea ports are the wharfs, which need to be more structurally efficient, especially with the ships being bigger and bigger. When it comes to river ports, they are directly affected by the aging dams and the outdated technology that is being used, which causes the US to fall behind in terms of technology and performance.

The bygone sea ports and ports related infrastructure, which is slowly driving the sea ports into an obsolete dark hole, could cause the loss of up to 738 000 jobs within the next 20 years, according to Jeff Bridges.

Overall, US infrastructure is falling apart. The roads and bridges built in the late 20s, and designed to last 50 years, are now slowly decaying; the railroads and railroad bridges are considerably behind the rest of the world’s level of infrastructure, which lowers America’s ability to compete on the global market. We don’t even want to talk about why America does not have high speed trains and better public transport.

The general opinion is that all this could be fixed easily, kind of like with a magic wand, as long as there is some funding available. As we discussed above, the HTF is slowly drying out and you can see this in the projected estimates for end-of-month cash balances below: 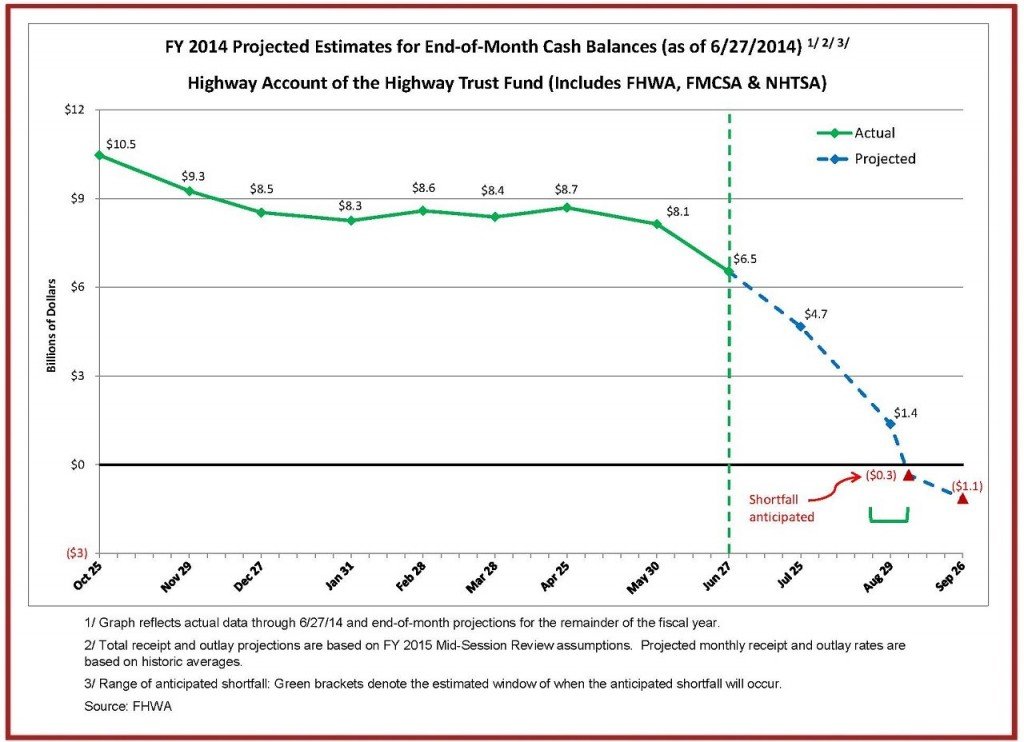 Courtesy of the United States Department of Transportation 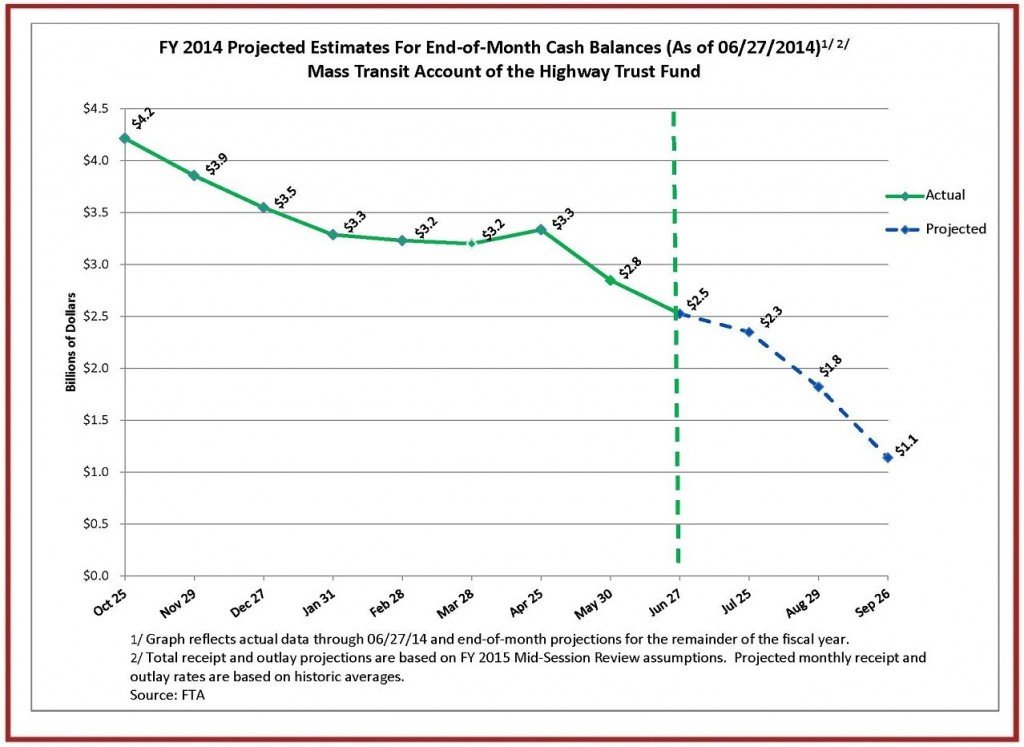 Courtesy of the United States Department of Transportation

The lack of funding and the lack of solutions has driven the country into a political paralysis, where the government is afraid of introducing an increase in fuel taxes in order to generate extra funding for the Highway Trust Fund. At the beginning of this year, President Obama proposed a 14% tax on corporate overseas profits to fund infrastructure projects. If the proposal is approved, the infrastructure in America will have some hope of improvement. Obama’s proposal will include a 6 year, $478 billion public-works program for the repair and reconstruction of highways and bridges; half of the plan will be financed with a one-time, 14% tax on the corporate profits overseas.

With today’s roads and bridges condition, you would really want to make sure you have everything needed with you in the car when hitting the road…just in case. For ideas, check out 5 things to have in your car.

Now, what is your opinion on the US infrastructure? Do you think that the fuel tax should be increased or Obama’s proposal makes more sense to you? Share your opinion and also feel free to share stories and photos from around the US.