In the summer of 2011, Toyota Motor Corporation announced its plans for a partnership with the newest automaker in the world, Tesla Motors. Almost four years later, the partnership has ceased, but the efforts toward sustainability continue with full speed.

In 2011, Toyota and Tesla joined forces to develop Toyota’s first electric vehicle. The news did not come as a surprise since Toyota acquired a 3 percent stake in the Silicon Valley upstart a year earlier, which many considered a sign for something bigger. This collaboration led to the creation of a new electric version of the RAV4, one of Toyota’s most popular models. The EV was almost identical with Toyota’s traditional five-passenger SUV but with Tesla’s electric powertrains. At that time, Tesla was also working on its Model S, the electric roadster, and the company was at its highest peak of innovation and new technology development.

Tesla’s part of the deal was focused on supplying of all of the RAV4’s electric powertrain components, including the motor and lithium-ion (Li-ion) battery pack. Once produced, the components were shipped to Toyota’s production facilities in Woodstock, Ontario. As expected, Toyota provided the RAV4 chassis and the body. The production of the RAV4 EV took place on Toyota’s Woodstock lines, along with the gasoline-powered RAV4, which aimed to simplify the manufacturing process and guarantee the highest possible quality control. 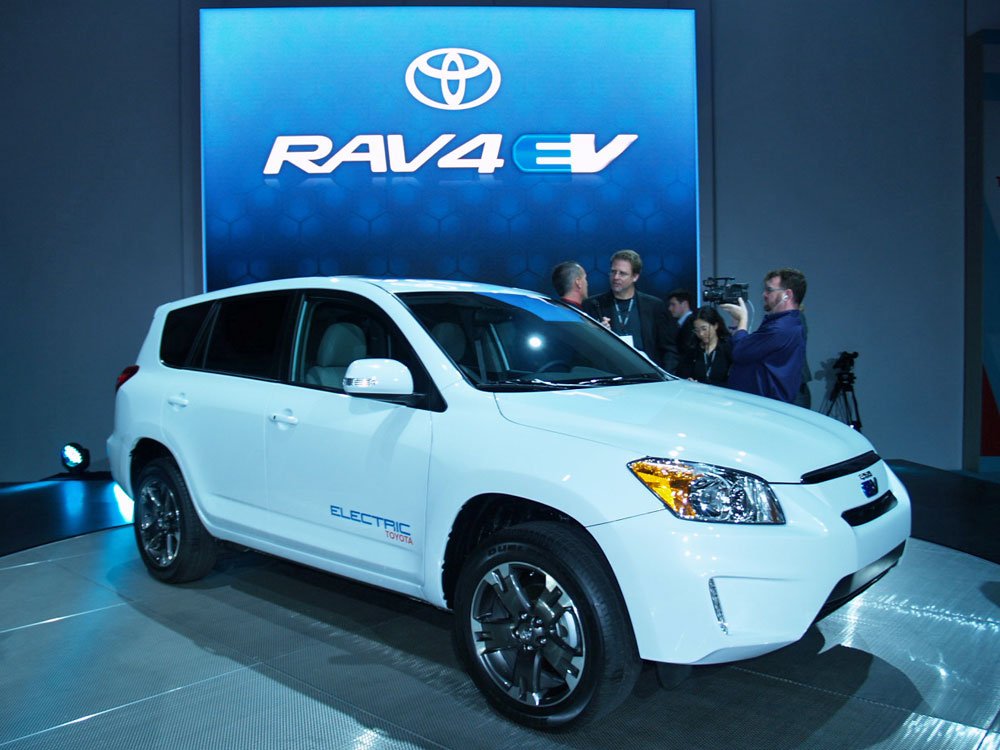 The goal for the development of the new RAV4 EV was to provide both a good range and a “spirited driving”. This is why the car was created in two modes – normal and sport – where the latter allowed for acceleration from 0 to 60 mi/h in 7s. The sport mode provides 154 horsepower.

The RAV4 EV breaks were brought over from the Toyota Prius. However, the feel of the soft, spongy brake system does not bring too much of a thrill to those who like to drive. It would have been more exciting if the company had used the one-pedal system from Tesla’s Model 3, which provides drivers with stronger and sharper feel when braking or accelerating.

The battery pack of the RAV4 EV consists of nearly 4,500 cells and is rated at 41.8 kWh. The battery is capable of providing at least 129 kW of instant power during the 30s of acceleration. The charge time necessary for the battery is 5-6h using a 240-V 40-A AC charger. The EV charging system for the electric RAV4 was designed in two modes. The standard mode helps maximize battery life by charging it to 35kWh. This allows for driving up to the EPA-approved range of 92 miles. The extended mode charges the battery to its full capacity – 41.8 kWh, which provides for a range of 118 miles.

The RAV4 EV was set on a low-volume production where only 2,600 vehicles were to be produced during a period of three years. Almost all vehicles were sold – 2,533 RAV4 EVs are currently in circulation, and the rest were saved as test and display vehicles.

The RAV4 EV was sold solely in certain Californian markets. Toyota’s partnership with Tesla on the production of the RAV4 EV provided the Japanese automaker with “a compliance car” to meet the zero-emission rules issued by the California Air Resource Board. And for Tesla, the deal meant money, its first factory at a bargain price, and the credibility that comes with working together with an industry leader.

So what went wrong? Nothing really. Despite a minor software problem in the Tesla’s development of the RAV4 system, which required a recall of some vehicles, nothing major took place to cause the split of the partnership. The clashes that occurred between the two automakers were primarily over the ideology behind the development of electric vehicles.

The decision came from Toyota, who decided to focus on hydrogen fuel cell vehicles. The company said it would no longer produce another all-electric vehicle. If consumers want one, they will have to order a Tesla Model X or wait further until Model 3 comes to the market.

As mentioned earlier, Tesla’s version of Toyota’s RAV4 EV was widely considered as Toyota’s compliance car to the CARB zero-emission rules. As soon as the vehicle was built, however, more competitors established their own response to the rules concerning ZEV (zero-emission vehicle) models. General Motors, Ford, and Nissan already had their response to Toyota’s RAV4 and they were quickly gaining strength in the market, too. The RAV4 EV did not sell quite well, and Toyota even had to cut the price to sell better against competitors. This is why some consider the wrap-up of the Tesla-Toyota partnership as a step back or even worse – the end of a race that Toyota did not manage to win.

New RAV4 and the future beyond

It seemed like the Japanese automaker had no plans to replace the RAV4 anytime soon. In November 2015, however, it became widely known that Toyota was planning a refresh of the RAV4 EV. In alignment with the company’s strategic focus, this time, Toyota turned the RAV4 into a hybrid instead.

While this shows clearly that Toyota is moving away from Tesla’s core mission to bring electric vehicles to the mass market, Elon Musk, Tesla’s CEO, claimed that this might not be the last partnership between the two automakers. Back in 2014, he warned the public that there might be something bigger coming in 2-3 years. Well? Is it time we start getting excited already? Or did Toyota do what Daimler is doing today? Both automakers were in partnership with Tesla for the provision of lithium-ion battery packs. Both automakers invested in Tesla stock. Both automakers ditched the newcomer and claimed they were focusing on their own operations. What Daimler needed Tesla for is now insourced. Would Toyota turn the wheel and produce its own batteries and all-electric vehicles, too? Well, probably not.

Toyota’s focus on hydrogen fuel cell vehicle is what sets the company apart. The Japanese automaker is committed to a broad strategy of sustainable mobility, incorporating products, partnerships, the urban environment, and energy.  Despite its short life, the Toyota-Tesla partnership was a tactical step in Toyota’s long-term strategy towards sustainability and its goals to collaborate with companies with greatest technological know-how. On that, we can add a check mark for success.

The Toyota-Tesla partnership will be remembered not because of the RAV4 EV that came out as a result of the deal, but because of the symbolic unity that the partnership created. The 2012 RAV4 EV represented a consolidation of two disparate corporate cultures – a traditionalist with a vision and an innovative startup. It proved that there should be continuity between players in every industry because this is the only way to define more specific goals and to move the industry forward. 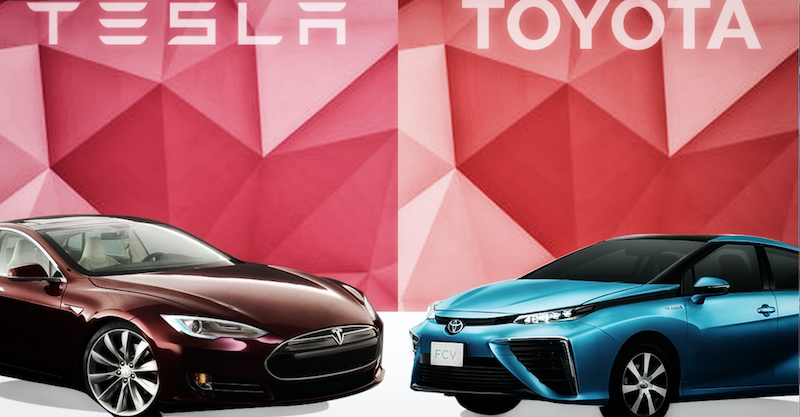