Why are trucking companies being sold out?

If you type “trucking companies” in Google, the first page is overloaded with results of “successful businesses for sale”. There are thousands of them out there, just like the Caribous in their migrating season.

I can’t help but wonder why is that?

What’s up with the catchy headline – “successful business for sale”… How often do you see a successful business selling out, there is always a reason behind it. And many would say the reason rarely is because it is successful; whether it is the expenditures going up or the profit is not as good as expected, or simply the sector is not as good anymore, but there is always an underlying reason for the business being sold. With the current market conditions there are so many triggers for a trucking company to decide to sell that you wonder why are the rest of them staying?

Below you can find a list of possible reasons that are driving businesses out of the trucking sector:

1. Trucking business is slowing down all over America. According to the Cass Freight Index Report, the overall shipments have been declining since the beginning of the year, compared to the same period last year. In the April Report, you can see that the shipments have increased by 4.2% compared to March 2015; however April 2015 is still 2.5% lower than the same period last year.

2. Expenditure is still pretty high, even though the number of shipments is going down. In the graph you can see that the increase in expenditures is more drastic than the increase of shipping; while the decrease in expenditure is more subtle than the decrease in shipments. This is usually the place where I ask myself “How are these companies still making profit”. Well, overall it is not that bad, even though expenditures went up by 1.6% in April, they still managed to be 4.7% lower than the payments during the same month last year. 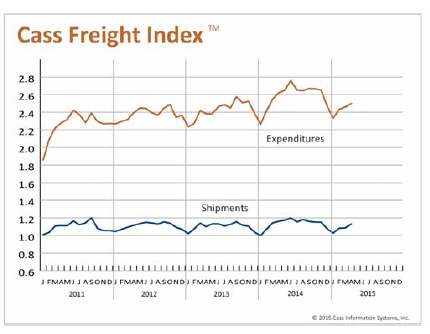 3. Exuberant and misleading 2014 – many businesses decided to replace their existing equipment or to add more capacity to their fleet, however with the slow start of 2015 not everyone could cover the additional cost added the year before. Of course if you are patient enough 2015 seems to be picking up and things are looking brighter, however many business just don’t have the luxury to wait.

4. Lack of qualified drivers – we have discussed this issue before and the reality hasn’t changed much since then. The number of qualified and available drivers is not increasing and it’s getting harder and harder to persuade people to leave their families behind and hit the road, given that because of regulations they might be stuck in a location for days.

5. Constant changes in regulations, detours due to outdated infrastructure, additional charges and fees. It is not easy to cope with new regulations, especially when you have to face a number of different states or if you have to take long detours due to repairs or whatever else. This not only adds up to the time of the driver, hence the pay rate, but it increases the fuel cost exponentially, especially now with the fuel prices going back to normal.

6. According to the Cass Freight Index Report for April – the international situation is not looking any brighter in the months to come, compared to the first 4 months of the year; hence the export business will probably not go up much. The bright side is that the import is supposed to spur up a little and finally meet our expectations.

The trucking sector hasn’t been performing as well as we would have hoped or expected to, given that America runs on trucks. However, for the trucking businesses that decide to stay and stick around rather than selling out a brighter future is to be expected. The problem with the driver scarcity can be overcome if the trucking companies take care of their employees, regulations and policies and accept, treat and respect women truck drivers, which will give them the opportunity to find more qualified drivers for their fleets.

The expenditure problem is not going away either, especially with the oil prices moving up. However, with the expected increase in shipments this can easily be taken care of, given that the expenditures are not going to go above their rates from last year. The only volatile expenditure is still human capital and of course the penalties and additional fees that the company might have to pay due to not following regulations.

And after all, the trucking business is not for everyone. If it gets too hard and you don’t think you can cope with all the pressure and insecurity, then maybe you are right and selling out is the best option. One thing is for sure – building a successful trucking business is a much bigger challenge today than it was 20 years ago. So, do you think it’s worth it to stick around, even if all the odds are against you, or you should simply sell out?