What have you hauled with a classic car?

Being serious and professional is crucial for every business. But then again, sometimes we have to relax a bit, so we can entertain the festive spirit. After all, it would not be a proper a holiday season if we did not talk about some fun topics, right?

That is why instead of the usual deep takes into the automobile culture or even practical advice, today we will talk about… hauling stuff. More precisely, we will focus on the weird or interesting things people have hauled with their cars. Better yet – their classic cars!

Of course, we would also like to hear from you. If you have a fun story about interesting things you have hauled with your car, share it in the comments below. You know what – even if you have just seen such a thing on the road, I will take that as well. Now, let me tell you what I have found!

Interesting things people have hauled with their cars

Naturally, there are a lot more regular cars than classic vehicles out there. So the potential for finding weird hauls with everyday autos is much higher. So why limit ourselves only to classics, if we can have a lot more fun otherwise? Case in point:

Do you know what really sucks? Moving! You have to figure out a way to schedule everything, book movers, pack your stuff… It is just too much hassle. Not to mention all the money you would have to spend, right?

So it is no surprise that some people prefer to take matters into their own hands. Who said that any car cannot just be turned into a moving truck? All it takes is a bit of imagination, some sturdy ropes, and a touch of mountaineering experience. 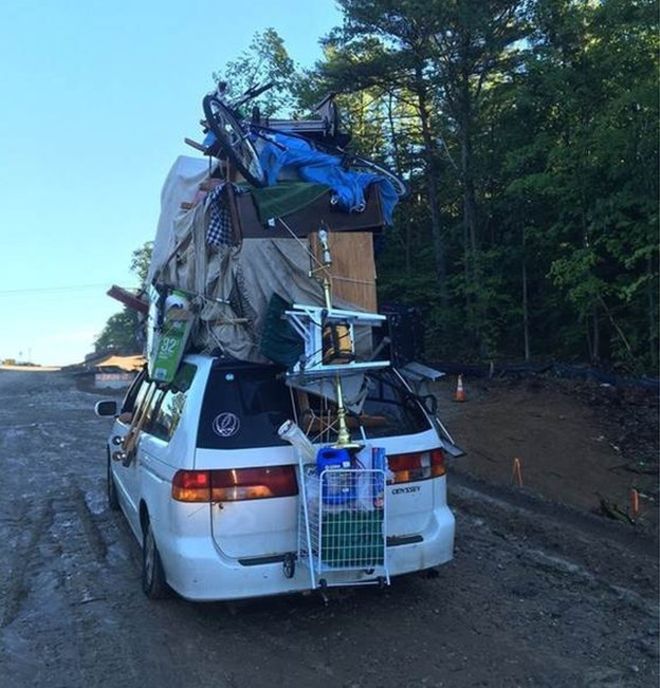 On the other hand, driving such a monster is probably not that easy. I bet it tests your driving skills as well. Sadly (or not), law enforcement does not endorse these practices. It must have been fun while it lasted, I guess!

Surprisingly not a road accident

If I tell you that I have seen a car on top of another, you will probably consider this to be a road accident. We need to be more open-minded! Because some people push their vehicles to the limit in what seems to be an extremely dangerous hauling practice.

Luckily, this is not a common thing, although I recently found out that Top Gear had a “wacky race” with a similar concept. They tied a bunch of German vehicle on top of other German vehicles and raced them. I cannot tell you why. “The show must go on” is likely the only real reason.

Are you familiar with the saying “The poison is in the dose”? It is attributed to the Renaissance physician Paracelsus. Why am I giving you a lesson in medical history though? Because it looks like the saying could also go “the weird is in the quantity”.

There is nothing particularly interesting about hauling a bike. Even two bikes do not catch my eye. Hey, if you are a fan, you may even install a special rail for up to 5 bikes. But how about… 50? The dose matters indeed. 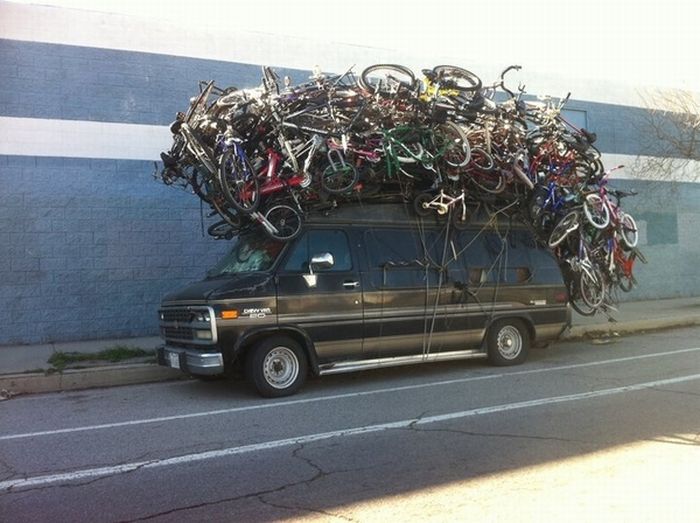 Of course, this cannot be healthy at all. We are once again crossing from the realm of the weird to the one of the downright unreasonable. But I guess this is how you transport an entire bike shop inventory.

What would this article be, if I did not mention the holidays at all? We all love to celebrate things and ‘tis the season to be jolly anyway. But I get you – there is nothing weird or interesting about that. It is completely normal for folks to haul a Christmas tree. Would they do it with a supercar though?

Now, if Top Gear was not enough to prove that British car enthusiasts are something else, this guy (Shmee150) is here to do it. He took an Aston Martin Vantage GT8, put a Christmas tree on top of it, and went to show this off on the road. Why? Tell me if you figure it out, because I have been wondering this myself.

I cannot lie though, it is entertaining to watch. That car is such a work of art, that something as mundane as a Christmas tree haul makes it look ridiculous. You know what – if someone told me that I could take this car for a spin on that condition alone, I would do it too!

What have people hauled with a classic car

Okay, it is time to move on from the modern vehicles and go back in time. We have seen some ridiculous hauls, and some dangerous ones, so what is up next? Well, when it comes to classics, people tend to be a lot more reasonable.

Instead of focusing on absurd hauls, I figured we should instead look at what people would usually haul back in the day. It makes for an entertaining case study and a nice trip down memory lane. Or for the younger folks – a history lesson.

The haulers of the past

I will start our vintage car hauling list by mentioning one of my favorite findings – the most bizarre car transport in the world. These vehicles are technically hauling stuff, but that is not what makes them interesting. Instead, it is the transport itself.

If you think about it, car manufacturing is a fairly new industry. We have been perfecting it for only a century. That means people had to stumble through quite a lot of design flops back in the day. Or they just did not think big enough. The 18-wheels-of-steel kind of trucks were not available for quite a while, so they had to make do with some smaller haulers. Well, at least they looked cute!

Modern-day recreational vehicles are nice and all, but they have nothing on the vintage ones. The classic campers look very appealing to me. Doubly so, when you pair them with a nice classic car. Hauling that thing around in a third gen Chevrolet Impala, for example, would be a dream. I can just imagine what an amazing road trip that would be. 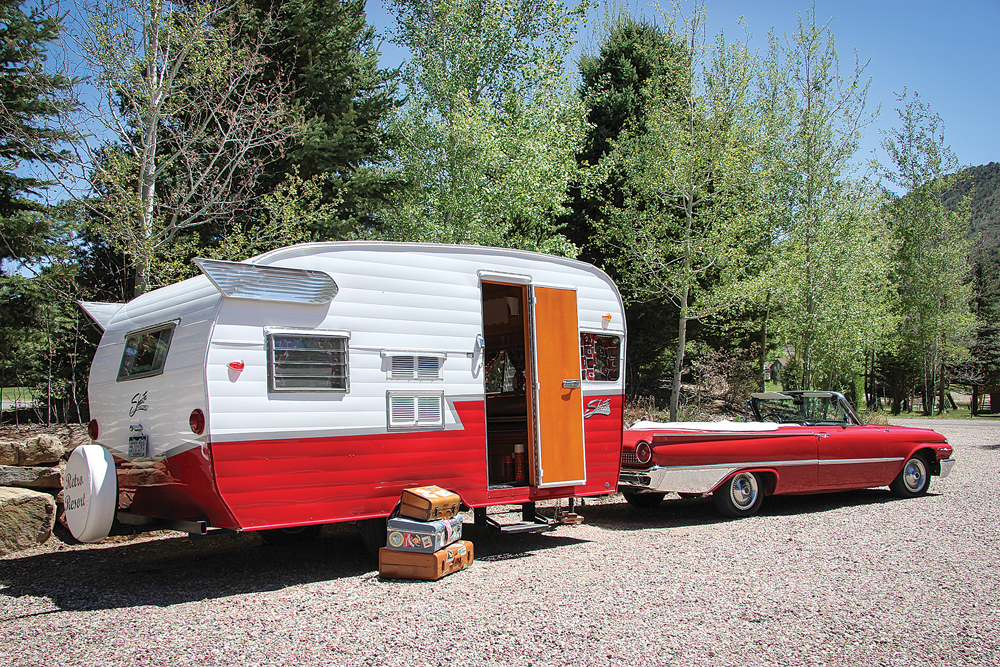 Have you ever had felt nostalgia about an era, in which you have not even lived? That is how I feel when I see these cars. Forget about the weird hauls from above – this is what gets me going. Just some regular vintage trailer hauling. Through the lens of time, it looks incredibly interesting!

Christmas hauling – the past had a knack for it

Let’s get back to the Christmas theme for a second. We have already established that there is nothing weird or interesting about hauling Christmas trees. But is it not peculiar that it is so much a part of our culture, that Ford used it as advertisement back in the day?

Ford’s slogan for their Pinto ad campaign was “Put a Pinto under your tree”. However, they also used similar advertisements for their Ford Mustang and ’69 Ford models. Were the ads effective? I really do not know. Nevertheless, they are interesting, especially when you look at them 5 decades later.

Actually, other companies also employed similar tactics. Christmas advertising was a big thing even in the past. They did not have digital artworks though, which makes the ads much more appealing – at least for us modern folks.

Put a boat on the road

Before I wrap up this article, I have one last interesting haul to share. Once again, it is not about anything weird being hauled. Instead, it is about the very idea of going for a boat ride… by towing your own boat.
Of course, this one has been done plenty of times nowadays. Yet imagine how classy it would feel to tow a simple wooden boat with a nice Porsche convertible. You know what, it does not even have to be a Porsche. The Impala I mentioned above could do the trick as well.

What would you haul?

After all these weird and interesting hauls I am left a bit nostalgic if you cannot tell. Honestly, I think I have to write that vintage camper thing on my bucket list. I would love to do a road trip in it along all the states. Whether it takes me three months or a year, who cares? It would be awesome!

But what about you? What do you want to haul with a classic car? Perhaps you have a dream of your own, or you just want the vintage vehicle without anything attached to it. That works as well, I guess. Actually, we can help you a bit with that.

If you find a nice deal on a classic car online, we can assist you with transporting it. You can get a free car shipping quote from Corsia Logistics any time you want.

Right now I wish you all the best on your holidays and spread the cheer all around!